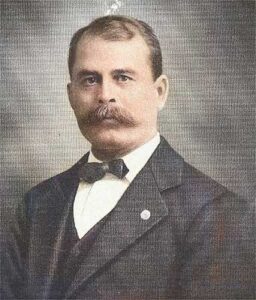 Nabor Pacheco was the first person of Mexican descent elected as Sheriff of Pima County in Arizona Territory in 1904. He is credited with ending the practice of Public Hangings in Arizona territory.

Born July 12, 1863, in Tucson, Arizona, Nabor’s parents were immigrants from Sonora, Mexico. His father, Refugio Pacheco, was a successful farmer who served on the Pima County Board of Supervisors from 1871 to 1873, at which time Refugio died suddenly at the age of 36. Nabor attended school in Tucson and, upon completion, began farming and raising cattle on the 160 acres of land left by his father.

Active in politics and community affairs, Nabor volunteered as a firefighter and was a founder of an organization that advocated for the interests of Pima County’s Mexican American community. He was also active in the Republican Party.

During this time, Nabor married Carmen Monteverde, with whom he would eventually have seven children.

The Tucson City Council appointed Nabor as a police officer in 1896, and in 1900 he was elected to two two-year terms as a Pima County Constable. In 1904 he was elected as the county’s first Hispanic Sheriff, primarily on the strength of Tucson’s Mexican American vote. 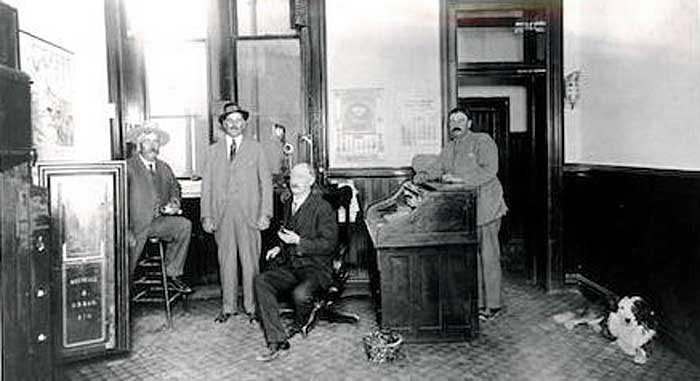 Nabor Pacheco had a constant companion as a law officer. The Arizona Daily Star reported in late 1908, “Several American cities, following a custom established in Belgium, having trained dogs to catch thieves and assist the police in their work.” One of those was apparently loyal to Nabor. Author and former Arizona Representative Tom Prezelski writes, “As sheriff, Pacheco’s most reliable deputy was “Jack,” a dog who began to follow him around during his days as a policeman. Jack “jumped in and helped” during arrests and “had become so accustomed to the court house that he acted as if the building was his.”

Prezelski also says even though much of his duty was performed on horseback, Nabor seems to have been the first Sheriff to regularly use an automobile. Pacheco is said to have personally pursued a robbery suspect all the way to El Paso. He was also known to work hand in hand with the Arizona Rangers. Author Bill O’Neal mentions Pacheco several times in his book about the rangers regarding his work with Ranger Captian Harry Wheeler on numerous posses and manhunts for rustlers and murderers, including those into hostile Indian territories. 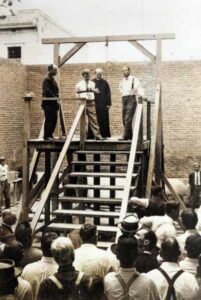 One of the last Public Hangings in Pima County Arizona. Sheriff Nabor Pacheco standing on the right side of the gallows at the hanging of Ed Hawkins in February 1908.

Public Hangings were still the norm in Tucson during his term as Sherrif, events that often became spectacles with large audiences in attendance. There were two of these Hangings during Pacheco’s term, both within weeks of each other in 1908. The experience led Nabor to say:

“It seems to me that Arizona is behind the states of the east in this respect. There they take the men to the state penitentiary, and the thing is done quietly by the warden and his assistants. There is none of this disgusting and unavoidable lack of privacy which turns a hanging into a morbid holiday and kills a convict while hundreds of men and boys stare and gape at him.”

After Pacheco lobbied to have the responsibility removed from county officials and placed with the territorial prison, those two hangings became Pima County’s last public execution. Democrats had regained their stronghold on the county by 1908, and Nabor decided not to run again for office. After stepping down, he was appointed City Marshal of Tucson. During that time, he conducted a series of raids against drugs, gambling, and prostitution as part of Arizona Territory’s effort to gain statehood, which finally occurred in 1912.

Controversy over his son’s alleged involvement with the murder of a prostitute and a feud with the Tucson mayor left Nabor vulnerable and he lost his position as Marshal after Democrats swept the city elections. Nabor Pacheco returned to farming and real estate until he died in 1920.