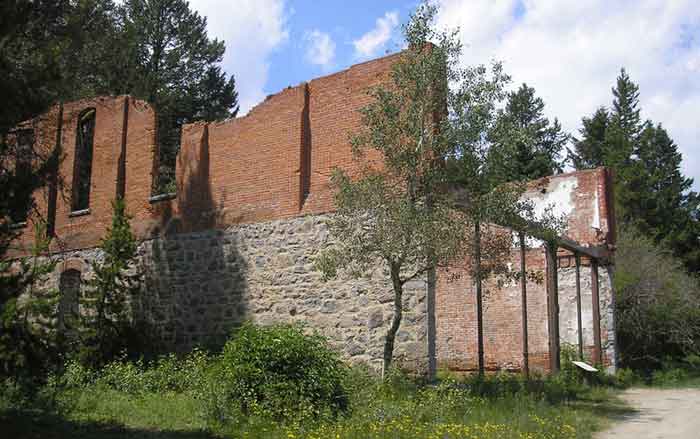 Ruins of Union Hall in Granite, Montana by Kathy Weiser-Alexander.

Four miles up Granite Mountain, southeast of Phillipsburg, Montana was one of the largest silver mining camps in the state. Nicknamed “Montana’s Silver Queen,” the town once boasted more than 3,000 residents.

Silver was first discovered by a man named Eli Holland in 1875, and though a small shaft was dug, little work progressed at the claim. However, that changed in 1880 when Charles D. McLure, superintendent of the Hope Mill in Philipsburg, found a rich specimen of ruby silver at the site, which assayed at 2,000 ounces of silver per ton.

He soon partnered with a man named Charles Clark and the two bought the property and formed the Granite Mountain Mining Company.

Securing investors from St. Louis, Missouri, they capitalized the company with ten million dollars. The company spent $130,000 during the next two years to develop the mine and in 1882, hit a rich lode which assayed at 1,700 ounces of silver per ton. Calling it the Bonanza Chute, the vein returned some $274,000 worth of silver by the following year. 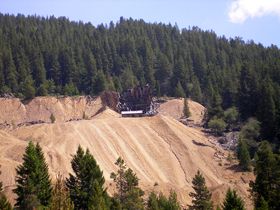 In 1884, the company town of Granite was developed around the mine and lots were rented to miners for $2.50 per month. With the diversity of the miners, neighborhoods quickly developed which included Finnlander Lane, Cornish Row, and Donegal Lane, which was home to Irish and Danish Miners. Magnolia Avenue was home to mine managers and superintendents of the Granite Mine, as well as doctors and other professionals,  and soon took on the nickname of “Silk Stocking Row.” The town also supported a sizable Chinese population, which lived in the gully below Main Street, along with those working in the Red Light District.

Though homes and businesses were quickly built, the camp struggled as there was no local water and initially it had to be hauled in by wagon from Fred Burr Lake. Later a flume and cistern system was built to support the camp.

By 1889, the camp boasted four churches, the Granite Mountain Star newspaper, a public school, 18 saloons, a hospital, fire station, bathhouse, a three-story Miners’ Union Hall, a thriving red-light district, a bank, and the Moore House, a three-story hotel, which was considered to be one of the best hotels in the Territory.

Unfortunately, the hospital was a busy place during the mine’s heyday years as numerous accidents occurred and an average of three miners per year were killed in explosions and falls. Granite; however, never had a cemetery because the ground was just too rocky for graves, so the remains of those miners and any others who died, were hauled down the mountain and buried in the Philipsburg Cemetery. 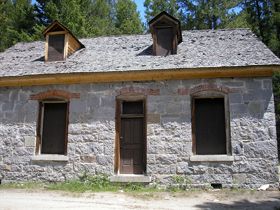 By 1889, the Superintendent’s House stood at the head of Magnolia Avenue, or “Silk Stocking Row,” where the elite of Granite lived. Today, it is the only home left on the block, by Kathy Weiser-Alexander.

The mine operations paid its first dividend to investors in 1885 and that same year a 20-stamp mill was built, later replaced by an 80-stamp mill. Between 1885 and 1888 the operation produced 2.5 million dollars in ore and in 1888 a new 100-stamp mill was built on Fred Burr Creek. The new Rumsey Mill, named for the president of the Granite Mountain Mining Company between 1884 and 1889, began operations in March 1889. It was connected to the mine by an 8,900-foot tramway and to Philipsburg by a 7.7-mile extension of the railroad.

Like other mining camps in the American West, Granite suffered dramatically when the Sherman Silver Purchase Act was repealed in 1893, drastically slashing the price of silver. Within a year, the town’s population dropped from about 3,200 to just 140.

Miner’ s Union Hall – Built in 1890 at a cost of $23,000, the union hall was the social center of the bustling mining camp. On the second floor of the three-story building, the main hall was used for stage productions, dances, concerts, and celebrations. Also housed on this floor were union offices and a library. The third floor held the lodge hall and meeting room for the miners union (both 2nd and 3rd floors were housed in the upper brick portion of the building) and the first floor housed a lounge and recreation room for the miners.  In the 1890s, other buildings along Main Street included saloons, rooming houses, and restaurants. Across the street was the newspaper office, and in the gully below was Chinatown and the red light district. 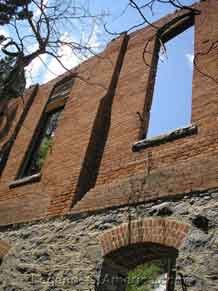 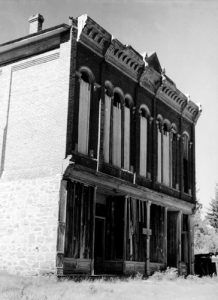 Though mining continued on a small scale, Granite had all but become a ghost town. However, it began to see a rebirth in 1898, when the mines began operating again, producing about one million dollars of bullion a year until 1901. The mines continued to operate intermittently until the 1930s. In 1958, new investors began conducting exploration work in the Granite Mine, but when a fire broke out, most of the surface structures were destroyed. 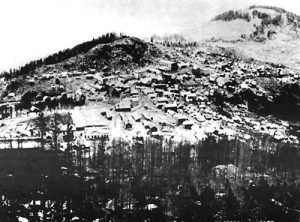 The last resident of Granite, Mae Werning, continued to live in the old town, long after all other residents had left. She spent many years as the town’s caretaker and as a water commissioner for Deer Lodge area ranchers. She died in 1969 at the age of 75.

Today, the old townsite is preserved as a Montana State Park. On the road to the town, parts of the old tramway can still be seen. Upon reaching Granite, tailings and mine buildings can be seen on the hillside.

While many of the buildings are long gone, there is still a scattering of a few that remain standing or are in various states of deterioration, including the Miner’s Union Hall, the stone Superintendent’s home, the tumbled down hospital, the old bank vault, and numerous cabins.

Granite is located some five miles southeast of Philipsburg. From downtown Philipsburg, turn south at the four-way stop and continue through the railroad underpass. Take the first left and continue for about one mile. Turn right on the road marked with a white sign reading Granite. Keep to left for about four miles to the old mining camp. A 4-wheel drive or high clearance vehicle is recommended. 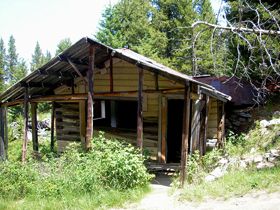