Railroad bridge over the Gasconade River between Arlington and Jerome, Missouri by Kathy Weiser-Alexander.

Jerome, Missouri is an unincorporated community located on the Gasconade River in western Phelps County.

This area, with its relatively broad river valleys in an otherwise rugged region of the Ozark Mountains, was attractive to some pioneer immigrants in the 1820s and 1830s. However, the area remained sparsely settled until after the Civil War.

In 1866, General John Charles Fremont gained control of the bankrupt Southwest Branch of the Pacific Railroad, which before the Civil War, had been constructed west from St. Louis to Rolla. Fremont then began to resume construction to push the railroad westward. By 1867, the line had reached Arlington, across the Gasconade River from Jerome and construction began on a railroad bridge. That year, Thomas C. Harrison platted the town of Arlington along the new railroad on the east side of the Gasconade, while Fremont’s associate William F. Greely platted “Fremont Town” on the west side. 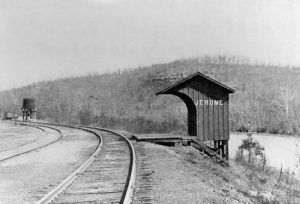 As the railroad’s western terminus, Freemont Town enjoyed immediate and rapid growth. The townsite covered several acres centered around a large square where Greely started construction of a massive stone hotel. Within two years the town had a large population estimated at nearly 1,500 people. In 1869, however, construction of the rail line resumed under new owners. No longer a strategic transportation terminus, Freemont Town declined as quickly as it had risen. Its inhabitants deserted en masse and Greely’s unfinished hotel lay abandoned. The Phelps County Court officially vacated the plat of Freemont Town and its additions in 1874. By that time, it sported only one store, a schoolhouse, and three sawmills. Its sister city, Arlington across the river, fared somewhat better as a lumber shipping point, with a post office and two stores.

Though the town was all but abandoned, at some point its name was changed to Jerome. Lumbering of the region’s dense forests of oak and pine provided both towns with at least some commerce in the late 19th century. The timber throughout the Gasconade and Little Piney drainages was harvested and floated downstream in immense rafts to Jerome and Arlington where the wood was milled into finished lumber and railroad ties, then shipped out on the railroad. John F. Rucker and his son Booker Hall Rucker operated a lumber business in Jerome in the 1880s and 1890s, supplying both the Missouri Pacific and the St. Louis and San Francisco railroads with cross-ties. Booker Rucker also served as Arlington’s postmaster and ran a general store there in the 1890s. By the turn of the century, the area’s timber resources were depleted. 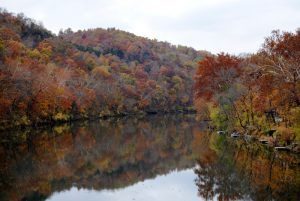 Though Arlington’s post office continued to survive, by 1901 Jerome had only one occupied building remaining — the clubhouse of the Jerome Hunting and Fishing Club, northwest of the Frisco railroad bridge, established by a group of St. Louis sportsmen. Though it didn’t last, this clubhouse proved to be a predictor of the future. Jerome and Arlington revived in the early 20th century as this stretch of the Gasconade River Valley became a favorite spot for fishing, boating, and outdoor recreation. After 38 years of being closed, Jerome’s post office reopened in June 1910. At about this same time, automobiles were traveling the roadways and Missouri State Highway 14 was created.

In 1914, the St. Louis-San Francisco Railway operated a weekend-only train between St. Louis and the Gasconade River at Jerome, called “The Fisherman” and people arrived in great numbers to enjoy fishing, hunting, and other sports activities on the Gasconade and Big Piney Rivers. In about 1916, Sylvester J. Bryant established the Bryant Resort at Jerome which, within ten years, was reported to be “one of the largest and most famous resorts in the middle-west.”

In 1923, two steel bridges were built on Highway 14 which linked Jerome and Arlington – one over the railroad bridge across the Gasconade River, and the other across the Little Piney River. In 1926, Missouri Highway 14 was made part of Route 66, which was paved by 1931. This dramatically increased travel and tourism in the area.

As a result, Sylvester Bryant added nine more cottages to his complex at Jerome in the spring of 1926 to better accommodate the growing numbers of visitors. During the next summer, Bryant brought in the Bryant Jazz Orchestra–“a dandy good orchestra”–which played in his new open-air pavilion every night after July 1. Across the river at Arlington, Judge and Mrs. G. V. Randolph operated Piney View Cottages; they would open the 1927 summer season with 34 guests. Other local residents served as fishing guides and provided boats and tackle for vacationers. There are no remains of this resort today. 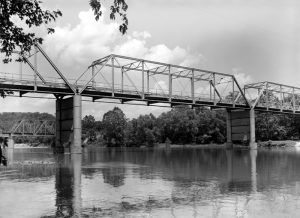 1928 steel truss bridge over the Gasconade River to Jerome, Missouri.

The rapid expansion of the state road system and the corresponding increase in travel provided a tempting climate for entrepreneurs hoping to capitalize on the unprecedented traffic and tourist dollars. These favorable conditions prompted a group of wealthy Rolla businessmen to join Lawrence W. Fitzpatrick, president of the St. Louis Construction Company, in an investment scheme to construct a toll bridge across the Gasconade River to link Route 66 with the nearby resorts at Jerome. While the Jerome Bridge was under construction, the State of Missouri made plans to designate a three-mile-long stretch of road running from Route 66 across the new Jerome Bridge to the county line, as a state highway. The four-span truss bridge, measuring 126 feet long, was completed in 1928. Unfortunately, this bridge was replaced with a nondescript bridge in 1997.

By that time, the village of Jerome had moved about a half-mile to the north on the west bank of the Gasconade River.

The Jerome Bridge, its area resorts, and Route 66 were located to the south of the town of Jerome on what is now D Highway. This area was once referred to by locals as Tater Hollow. 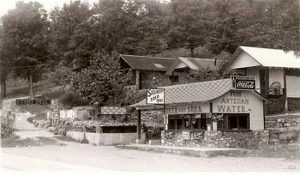 One of the most popular destinations on Route 66 was the Stony Dell Resort. When it was built in 1932, it was part of Arlington because it was located on the east side of the Gasconade River near the old town. It is now within the jurisdiction of the town of Jerome.

This complex was built, owned, and operated by George Prewett and his son, Vernon. Stonemasons by trade, the Prewetts, along with a carpenter named George Badger, began building this resort in the early 1930s. By the time it was complete it boasted a spring-fed swimming pool, a two-story stone bathhouse, a restaurant, a service station, tennis courts, landscaped gardens, picnic grounds, and a number of cabins, some made of stone and others constructed of wood. They rented for $1 to $2 a night. In 1935, the resort was described by the Rolla Herald as “one of the beauty spots of Phelps County. 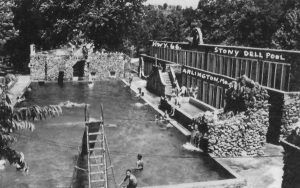 Swimming pool at the Stoney Dell Resort in Jerome, Missouri.

Its best-known feature was its 100-foot long rock swimming pool that was fed by an artesian well via a large stone fountain. Though the water was extremely cold, it didn’t stop plenty of people from enjoying its waters. In fact, the resort became so popular that the police sometimes had to be called to direct traffic. The artesian spring water was also sold in the Stony Dell gift shop and fed tanks in the restaurant where live fish were kept. After viewing the live fish, diners could select the one they wanted for dinner.

The Stony Dell Swimming Pool and Park complex once stood on the south side of the road, while the cabins and restaurant were on the north side. There are no remains of the park complex today.

3 thoughts on “Jerome, Missouri – A Tribute to the Trail of Tears”