Cuba, Missouri, is yet another outdoor adventurer’s paradise with 20 rustic lodges and campgrounds, three rafting rivers, and numerous lakes in the area that offer excellent hunting, fishing, canoeing, swimming, and water skiing. 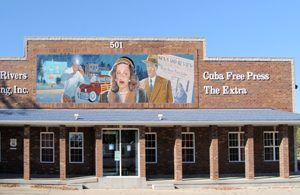 One of the many beautiful murals that can be found in Cuba, Missouri, by Kathy Weiser-Alexander.

Getting its start in 1857, Cuba was founded in anticipation of constructing the southern branch of the Union Pacific Railroad. The town was named in sympathy for the island of Cuba that was much in the news at the time due to the Spanish tyrannical rule of its people. Before the railroad arrived, many people in the area made their livings working in the iron ore mining industry and farming, with oxen carts providing the transportation of products to St. Louis. Mining would remain an important industry for nearly 50 years.

When the railroad arrived in 1860, the transportation of goods and products improved, and the town became a shipping center for the region. Soon apple orchards began to be planted in abundance. From 1895 through the 1920s, the community was known for its apples and its barrel-making industry. During this time, Cuba became known as the “The Land of the Big Red Apple,” and by the turn of the century, Cuba was the largest producer and distributor of apples in Missouri. Apple production declined in the 1930s but, the community still makes barrels. 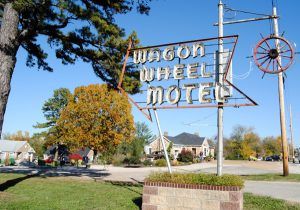 In 1931, Route 66 was completed through the city, and most of the businesses located by the railroad tracks moved to be closer to the new highway. More new businesses also sprang up along the pavement, including restaurants, filling stations, and motels, answering the needs of traveling motorists. One example is the Wagon Wheel Motel that continues to stand at 901 E. Washington. Initially built in 1934, it was constructed of Ozark native stone and first called the Wagon Wheel Cabins. In 1946, it was expanded from 9 units to 14 units. It once also featured a Standard Oil Station and a cafe. Now on the National Register of Historic Places, the retro motel serves weary Route 66 travelers.

At about the same time, higher labor costs drove shoe manufacturers to seek more affordable locations for their plants, and many relocated to rural areas. The shoe industry provided another boon for Cuba and would remain a vital part of its economy for over 60 years. 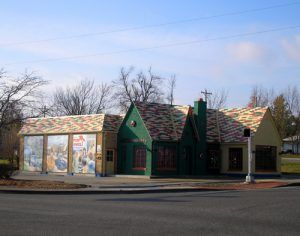 As you enter Cuba, a “new” stop along Route 66 is Missouri Hick Barbeque. While this place isn’t vintage Route 66, it serves up great Ozark barbeque, and the name itself is so representative of Route 66 that we had to include it. The restaurant, complete with an upstairs outdoor deck, is a great place to watch the traffic during the summer months. It is located at 913 E. Washington Street.

Another vintage peek of the Mother Road is available at the old Carr Phillips 66 Service Station, circa 1932, at Washington and Franklin Streets.

Many small towns along Route 66 display their pride in the Mother Road, but Cuba does it very well with the many murals on its buildings. The Viva Cuba organization completed its first mural in 2001 with plans to complete 12 more. The Missouri House and Senate have proclaimed Cuba as “Route 66 Mural City.”

Located just southwest of Cuba at 822 Beamer Lane is Bob’s Gasoline Alley, which displays the most extensive Historic Route 66 gasoline memorabilia collection in the mid-west. This place is a great sight to see and provides numerous photo opportunities. Its buildings are only open during special events, but the outdoor displays can be viewed at any time.

As you continue your trek along Route 66 to Rosati and St James, Missouri, you will pass by numerous wineries and vineyards in this rich wine-producing country.