Known as the “Forest City of the Ozarks,” St. James, Missouri, in the south-central part of the state, was born in 1859 when a man named John Wood anticipated the extension of the St. Louis-San Francisco Railway. Intended as a shipping point for the nearby Meramec Iron Works, which was shipping its products by wagon train, Wood saw an excellent opportunity to create the town. 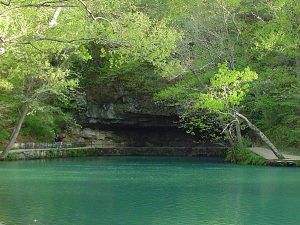 The town was first called Scioto, but its name was changed to St. James within a year. The Meramec Iron Works mined ore along the banks of the Meramec River, providing the town’s first employment.

When the Civil War began, the Union Army took control of the town after fierce partisan fighting took place in the area. A detachment of German volunteers, who were encamped near the town, was so impressed by the area that they moved their families to St. James when the war was over, creating an ethnic flavor that remains today.

After the war, the 1870s depression led St. James to turn to lumber, agriculture, and winemaking. Italian immigrants fleeing from the oppressive working conditions in Chicago started the vineyards and winemaking industry of the area. 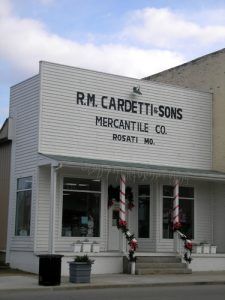 Though the Meramec Iron Works had slowed down, it continued to operate until 1891, when the iron deposits were exhausted. Today the industrial ruins can still be seen in Meramec Spring Park.

However, the town’s agricultural business had expanded to berries, dairy products, and lumber cut from the surrounding hills was shipped all over the country. Soon, more industry came to the area in a distillery and a women’s garment factory.

When Route 66 came through, St. James became a tourist destination with travelers enjoying its rich forests, Meramec Springs, and its proximity to the Ozark Riverways.

Today, this town of some 3,700 friendly people boasts a quaint downtown area filled with gift and antique stores, as well as several local wineries. The remains of the one-time thriving Meramec Iron Works can be found at the Meramec Spring Park, including two museums.

While in St. James, be sure to visit Finn’s Motel, a long-time Route 66 resting point at 777 Grover St. 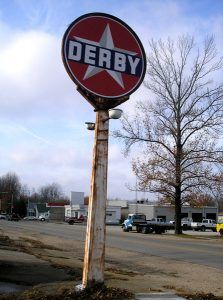 Also, keep your eyes open for an old Derby Station located on the south side of Route 66 and the “new” Cardetti & Sons business building.

As you near Rolla, you will see Route 66 Motors, which once served as a 1950s era gas station. Later, the business specialized in antiques, Route 66 souvenirs, and classic cars. Though its gift and souvenir shop is closed, it still features classic cars. It is located at 12651 Old Highway 66.