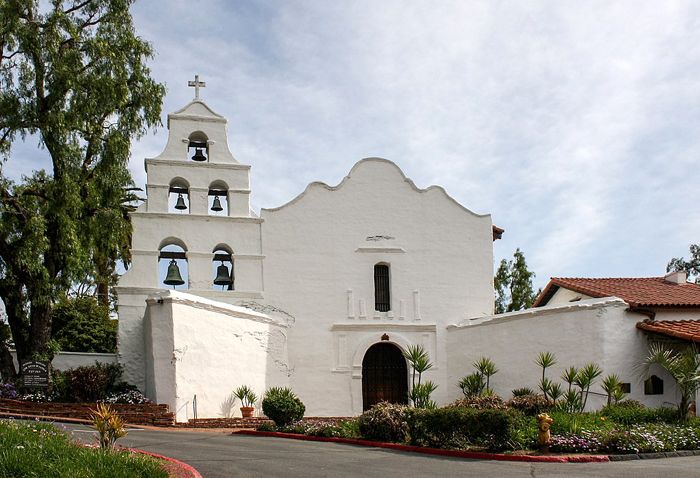 Mission Basilica San Diego de Alcalá was the first of 21 Franciscan missions established in California. Located in present-day San Diego, it was founded on July 16, 1769, by Spanish friar Junípero Serra in an area long inhabited by the Kumeyaay people. Today the mission site is a National Historic Landmark and continues to be an active Catholic Church.

Before the Spanish exploration of southern California, native peoples known as the Kumeyaay populated the area. By the late 1700s, Spain ventured into their territory in order to expand Spanish land holdings north of Mexico. A religious mission that sought to bring Catholicism to the thousands of natives who called the western coast their home accompanied this political move.

On July 1, 1769, a Franciscan friar, Father Junípero Serra, and a Spanish Capitan, Don Caspar de Portola, founded the first Spanish colony, Presidio, and church in the area. On July 16, Father Serra established the Mission San Diego de Alcalá, a crude church meant to serve both the Spanish colonists and begin Catholic outreach to local natives. The buildings first sat on Presidio Hill. The mission and the surrounding area were named for the Catholic Didacus of Alcalá, a Spaniard more commonly known as San Diego.

The mission remained at its original site for only five years, after which Father Serra moved it six miles to the east. The strong military presence at the San Diego Presidio seemed to deter the native people Serra was trying to reach, and water supplies were insufficient for the church’s agricultural ventures. The mission site was then moved to a valley several miles to the east, which was an ideal location close to both the San Diego River and many of the native villages along it. A wooden church and outbuildings were constructed in 1774.

Almost immediately there was a noticeable increase in the number of conversions which, by 1775, stood at 431. However, some of the local Kumeyaay people resented the Spanish intrusion into their land and in the early morning hours of November 4, 1775, more than 600 warriors silently crept into the mission compound. After plundering the chapel, they set the other buildings on fire which soon awakened the two missionaries, the Spanish guards, and the Christian neophytes. 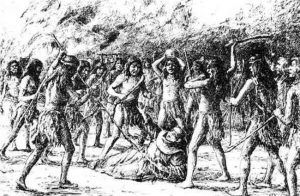 The killing of Father Luis Jayme

Rather than running for shelter, Fray Luis Jayme walked toward the band of warriors, uttering the traditional Franciscan greeting: “Amar a Dios, hijos!” — “Love God, my children!” The Kumeyaay warriors then seized him, stripped off his garments, shot some 18 arrows into his torso, before smashing his face with clubs and stones. He became California’s first Christian martyr and his remains are interred beneath the altar in the church that still stands today.

After the uprising, a second church on the site was constructed in 1777 of stronger adobe brick with a thatched roof and was replaced again in 1780 by an even larger adobe building, as the mission continued to expand. By the late 1790s, Mission San Diego de Alcalá was at the peak of its success with over 50,000 acres. The mission grew a variety of agricultural crops including corn, wheat, barley, kidney beans, and chickpeas and had some 20,000 sheep, 10,000 head of cattle, and 1,250 horses. A church vineyard produced wine. 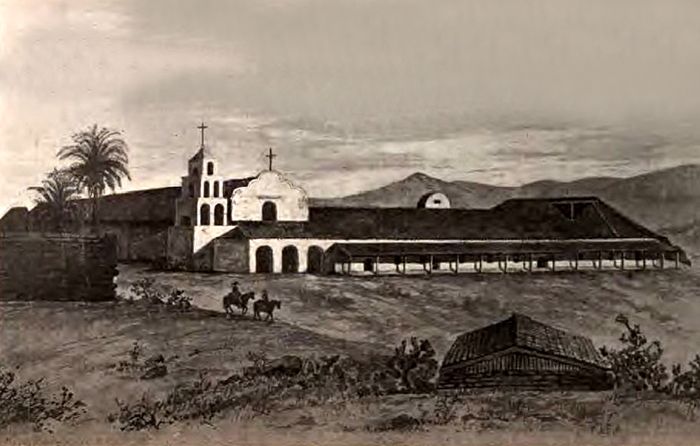 The church was rebuilt and expanded once more between 1808 and 1813. Father Jose Bernardo Sanchez designed and planned the new church, which is on the site today. The building is of adobe and whitewashed brick in a simple, long, rectangular plan. Unlike its predecessors, its roof was of timber shipped over 60 miles from the interior mountains. The church’s most distinct architectural feature was a single, four-story bell tower containing five bells of three sizes.

After Mexico gained its independence in 1821, the government soon secularized all of the former Catholic missions. After the Franciscans stopped administering the church at San Diego in 1834, the mission deteriorated into a ruin. Over the next several decades, the site was used privately for agricultural pursuits and as an American military outpost.

In 1848, after the Mexican American War, the United States Army occupied the mission grounds until 1858. The Army made numerous modifications on the mission grounds, including the conversion of the church into a two-story building, and the establishment of a military cemetery. 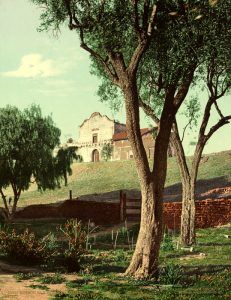 In 1862, the U.S. government returned what remained of the mission buildings and 22 acres of land to the Catholic Church but the mission buildings were falling into ruin. In 1891, Father Antonio Dominic Ubach and the Sisters of Saint Joseph of Carondelet moved the Saint Anthony’s Industrial School for Indian children from Old Town San Diego to the mission grounds. The school at the mission closed in 1907 and was moved to Banning, California.

After detailed historical research, in restoration and rebuilding work began in 1931 to bring Mission San Diego de Alcalá back to its 1813 appearance. In 1941, it was rededicated as an active Catholic parish and continues to serve a congregation today.

A Visitor Center Museum and Gift Shop are open daily to visitors and guests are allowed to view the complex. 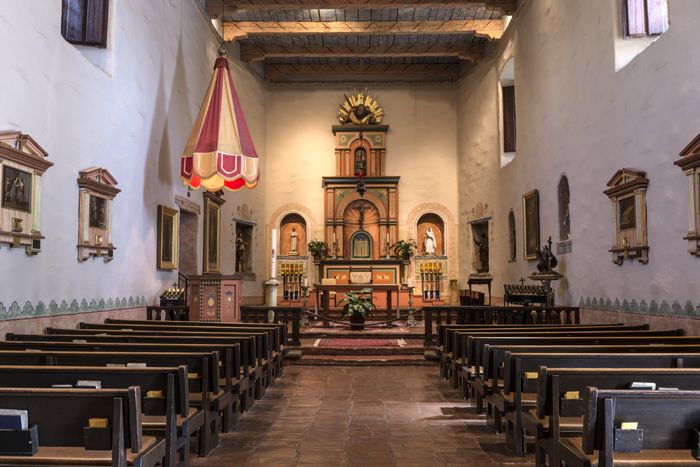