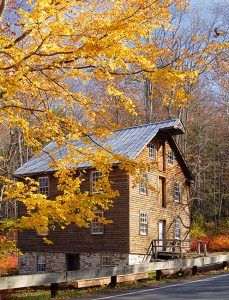 The present-day gristmill in Millbrook, New Jersey, was built on the site of Abram Garis’ 1832 grist mill. Photo courtesy State of New Jersey

Millbrook Village in Hardwick Township, New Jersey, is an original and re-created village located on the Old Mine Road in the Delaware Water Gap National Recreation Area.

The living history village is one of the most notable attractions in the area. Several structures from the 1800s survive, and aspects of pioneer life are exhibited and occasionally demonstrated by skilled and dedicated volunteers.

Millbrook started in 1832 when a local farmer named Abram Garris built a gristmill along the newly-finished Columbia-Walpack Turnpike, where it crossed a stream known as Van Campen’s Mill Brook. Within no time, other area farmers were bringing their grain to Garris for processing.

Within a few short years, a small village began to grow around the mill, including a blacksmith shop and a general store. Soon, other tradesmen also opened businesses, and the village of Millbrook was born. The village stretched out in a line along both sides of the turnpike. 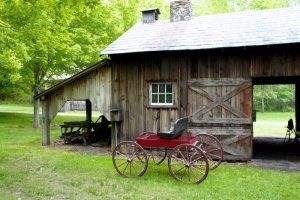 Isolated by its location between the Delaware River and mountains, the village was self-sufficient as residents grew or made much of what they needed and obtained other goods from the general store or local tradesmen. The community continued to grow until just after the Civil War, when it peaked with 19 significant buildings, including a Methodist Church, a school, a hotel, and approximately 75 residents.

However, the latter half of the 19th century brought technological advances to much of the United States. The tiny village soon found that the old mill was not as efficient as newer ones, and the small farmers couldn’t compete. When the railroad bypassed Millbrook, it was a death knell for the village. Soon, young people were moving to the cities for jobs, and as the population declined, the businesses and tradesmen went elsewhere. Garis’ mill closed just after 1900. 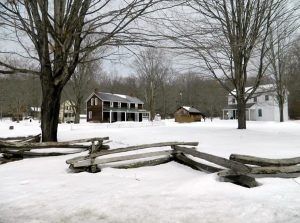 Over the years, many of the town’s buildings deteriorated or were condemned to make way for the ill-fated Tocks Island Dam project in the 1960s. When the dam project failed, the land acquired through eminent domain was turned over to the National Park Service. It became part of the Delaware Water Gap National Recreation Area was officially established on September 1, 1965.

Through the hard work of the volunteers, the Millbrook of today represents a late 19th-century rural community rather than an authentic restoration of the original Millbrook.

On summer weekends, between Memorial Day and Labor Day, several buildings are open to the public. The Millbrook Village Society and other volunteers in period costume demonstrate the folkways of that era between 10 AM and 4 PM. The village comes alive each year on the first weekend in September for Millbrook Days, when more than 150 volunteers of the Millbrook Village Society demonstrate crafts and skills of rural living in the young nation. The event is held rain or shine. Other events are also held throughout the year. Admission is free. The village can be visited all year. 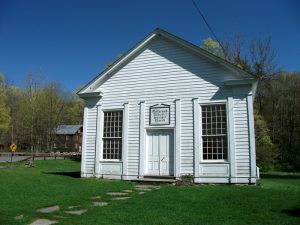 Millbrook Village is 12.2 northeast of the Kittatinny Point Visitor Center in Columbia, New Jersey. From here, visitors should head north on the River Road and continue onto the Old Mine Road to the village.