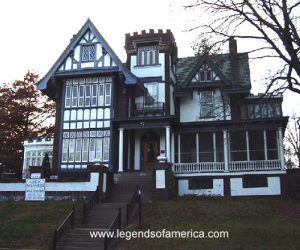 The Glick Mansion was placed on the National Register of Historic Places on February 26, 1992.

Along with the rest of Atchison, the Glick Mansion is also said to have a ghost of its own rattling around in this century-old home. Allegedly, the strange sounds heard in the night are that of a resident benevolent ghost. The sound of doors being opened and inexplicably closed by unseen forces is a common occurrence, as well as the sounds of footsteps when no one is around.

Today, guests can enjoy the century-old home by sipping English Tea or wine and tasting the lovely d’oeuvres in the parlor.

McInteer Villa – This stately mansion, called the McInteer Villa, at 1301 Kansas Avenue was built by Irish Immigrant, John McInteer in 1890. The villa was placed on the National Register of Historic Places on March 26, 1975, and odd phenomena is reported in the mansion, including lights turning on and off in the tower, which does not have electricity. People walking or driving past the building have often reported seeing figures at the windows when no one is in the house. Figures have often been reported to appear in photographs taken inside the old villa. 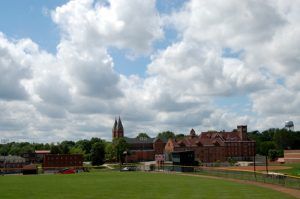 Benedictine College – Located on the bluffs overlooking the Missouri River, the 150-year-old Benedictine College, is also said to be haunted. Not by evil spirits, this historic college is said to remain home to the spirits of some of the old monks who founded the institution more than a century and a half ago. Continuing to look after and protect the old school, at least one of these spirits is known to be lurking about Ferrell Hall, a campus dormitory.

It all began in 1858 when the monks opened a boarding school with just six students. The following year, St. Benedict’s College was officially opened with 16 students.

From there, the college continued to grow into the beautiful 120-acre campus which now serves the educational needs of over 1000 students.

At another dormitory called Memorial Hall, several eerie things have been known to occur. According to legend, a girl who was in her closet changing, when the dresser mysteriously moved in front of the door. When she tried to open the door, it wouldn’t budge. Immediately believing her roommate was playing a prank on her, she yelled out “haha, very funny, let me out.” However, her roommate wasn’t even in the room. It wasn’t until she began to scream at the top of her lungs, that someone finally came to her rescue. 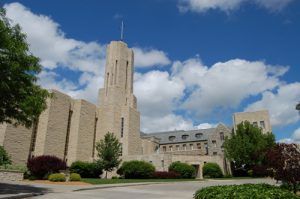 Another girl reported that while she was at the mirror in her room, her desk chair began to rock, then suddenly stopped. Frightened she immediately left the room and was too afraid to return for some time.

While all manner of freakish occurrences have been reported at the college, they are seemingly harmless to the students of Benedictine College.

Reader Update:  I am a sophomore at Benedictine College in Atchison, Kansas and last year, when I was a freshman, I lived in the Memorial Dorm. On my very first night at the dorm, I was awakened at 3:00 a.m. by a noise in my room. When I opened my eyes, I was startled to see someone standing in my closet rifling through my belongings. Exhausted and thinking it might be some kind of prank being played as part of “Recruitment Week,” I said nothing, as the person came and went several times, always returning to the closet. The next morning, my roommate stated that she had also heard the commotion from the night before. Checking the closet the next morning, I found it to be a mess. When I reported the strange event the next morning to the Resident Director, she responded that perhaps someone might have inadvertently gone into the wrong room. However, our door was locked. To this day, both my roommate and I are convinced that we were visited that night by a ghostly spirit. – Maria, October 2004 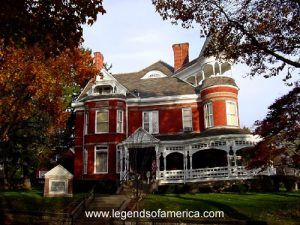 Muchnic House – Built in 1885, this old home was host to frequent Saturday night parties. On one such evening, the event ran into the wee hours of Sunday morning. Having been kept up very late, a maid who had worked the party the prior evening overslept the next morning. Rushing from her bedchamber, she ran down the back staircase to the kitchen and fell to her death. Today, witnesses report that lights from the back staircase turn on and off by themselves on Sunday mornings, followed by the smell of cooking bacon from the kitchen when no one is there. This house, which serves as an Art Gallery today, was listed on the National Register of Historic Places on July 12, 1974, and is located at 704 N. 4th Street.

Reader Update: My husband and I took a guided tour of the Muchnic House two years ago, and I had quite an interesting experience. The nice lady who gave us the tour was giving us all the history of the house when I happened to glance up to the top of the stairs and saw a young woman, maybe early 20’s, peering over the edge of the banister.

She seemed to be regarding us with wary curiosity as if to say, ” What are you doing here?!?” When we went upstairs to tour the rest of the house, no one was up there!! It wasn’t until we took the Haunted Trolley tour that I learned about the young woman who supposedly died there, falling down the stairs. I’ve also had some other spooky experiences at other places in Kansas, as well. – Anonymous, February 2005 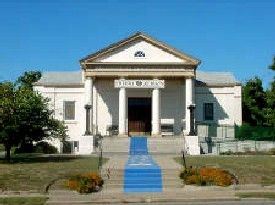 Theatre Atchison, 401 Santa Fe Street – Built in 1913, as the First Church of Christ, Scientist, the building was modeled after the architectural lines of its Mother Church in Boston. In 1973, the Presbyterian Church bought the building and ten years later they created a community theater organization. Today the building is known as the Presbyterian Community Center and is home to Theatre Atchison. Allegedly, it is also home to an unearthly spirit. Guests often describe feeling an unknown presence with them while visiting the theatre, while others working in the building describe odd noises that are often heard that have no apparent earthly cause.

The Santa Fe Depot – Built in 1880 as a freight depot for the Atchison, Topeka & Santa Fe Railway, the old depot stands as a landmark to Atchison’s historic past. The restored building houses a Kansas visitor information center, historical museum and the Chamber of Commerce offices. A trolley takes visitors on tours around the historic city, including a Haunted Atchison Tour.

The Depot is reportedly haunted by the ghost of “Hangman Bill,” a railroad worker is known for his habit of hanging from freight being loaded on and off cars. However, this prankish skill got him killed one day when the cable carrying one of the loads snapped and he was buried beneath the freight cargo. At the Santa Fe Depot today, staff reports hearing the sound of footsteps coming from above; however, the depot does not have a second floor.

You might also enjoy “Haunted Kansas Road Trip” from Vacations Made Easy.