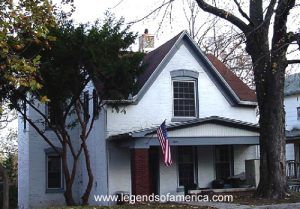 Sallie’s, the Heartland Ghost, North 2nd Street Home – Sallie, the “Heartland Ghost,” is said to haunt this house that once belonged to a local doctor. The tale of Sallie’s ghost has been featured three times on the popular 1990’s paranormal television show Sightings, as well as Unexplained Mysteries. Long ago, six-year-old Sallie grew terribly sick during the night with severe abdominal pains. Sallie’s mother rushed her to the doctor’s house, where his family lived on the upper floor and he operated his practice on the main floor.

Sallie’s mother listened as the doctor diagnosed young Sallie with a severe case of appendicitis, requiring immediate surgery. The little girl panicked at the sight of the surgical tools and the doctor was forced to hold her down to give her ether.

However, in his haste, the physician did not allow the anesthesia to take its full effect and began operating. Sallie awoke during the initial incision and began fighting and wresting against the pain. Before she died, she was said to have looked at the doctor with both fear and loathing and remains within the house to this day. 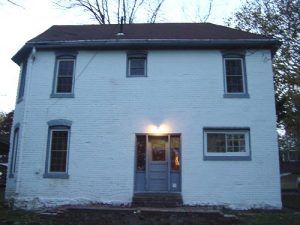 Back of Sallie House

In 1993, the house was rented to a young couple who reported that Sallie made an almost immediate appearance, playing frequent pranks such as turning electrical appliances on and off, turning pictures upside down, and scattering their child’s toys about the nursery.

Shortly after these harmless pranks, the ghostly activities turned malevolent, with the young husband suffering from frequent attacks. The couple also experienced a number of small spontaneous fires throughout the house. In fact, when the Sightings crew was at the house filming for the upcoming show, a red welt appeared on the stomach of the man and then began to bleed. The man, who described a severe drop in temperature prior to the attacks, would often be left with a number of long bloody scratches.

At their wits end, a psychic was consulted who informed the couple that there were actually two spirits within the house. The psychic indicated that it was not Sallie who was responsible for the malevolent activities, but rather a ghostly woman of about 30. While Sallie may have been responsible for the harmless pranks, it was this older woman who was the evil one. Allegedly, this mysterious woman was, at first, fond of the gentleman who lived in the house and tried to get close to him, while at the same time, attempting to drive a wedge between him and his wife. When she was unsuccessful at this, she began to attack the husband.

Finally, after the husband felt a strong shove from behind that nearly sent him over the stair railing, the couple could no longer take it and moved from the house.

Since this couple has moved, later residents have reported no activity occurring in the house.

In addition to being featured on the popular TV series Sightings, the Sallie House Haunting was also made into a made-for-TV movie called Haunted Heartland that first aired on Showtime. 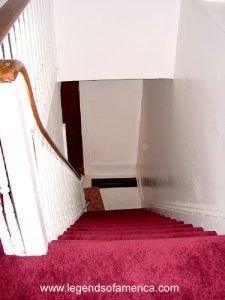 On November 13, 2004, we had an opportunity to visit Sallie’s House with local Atchison resident Jerry Talbert. Obtaining permission from the home’s current owner, we entered the house along with Jerry’s crew, who were carrying boxes of sophisticated electronic equipment. Newly remodeled, the home sported brand new carpet, paint cans about the home, and the sound of a radio playing faintly from the upstairs rooms.

The first sign that perhaps there is still some activity in the house occurred when I was the first to climb the staircase to the upstairs rooms. Suddenly, the volume on the radio increased fivefold. In no time at all, Renae, a member of Jerry’s group, appeared behind me, “Did you turn up the radio?” “No, I responded.” The volume had increased before I ever had a chance to reach the third step. Later, one of Jerry’s crew picked up an odd noise on a voice recorder that might have been described as a little girl’s voice, and another member reported having felt being pinched.

The psychic that Legends of America brought along described; that while the house still has some type of presence, it has little activity. She did get a sense of anxiety in one upstairs room. Of the many pictures that we took along the trip, only one suggests the possible sign of something unearthly. On the staircase where I had stepped when the volume increased on the radio, an orb appears in the photograph. While this might be contributed to the use of a digital camera, the coincidence is interesting.

Update from Jerry Talbert, April, 2005: Legends of America originally visited the Sallie House with Jerry Talbert, an Atchison resident in November 2004. Jerry and his crew have continued their investigations and reported recording audio of several sounds in the house during their 60-hour investigation. These include audio of little girl singing and playing, one that sounds like a little boy, one of a man, and another of at least one woman, maybe two. Other recordings include the sounds of coins hitting a wood floor, footsteps, thumps, growls and whispers. Often when the crew is talking, other voices have been heard interacting with their conversations. Jerry concludes that the house is still haunted, though there is nothing left that is evil. He continues by expressing his opinion that whatever malevolent presence was there when the young couple lived at the house, left when they did. 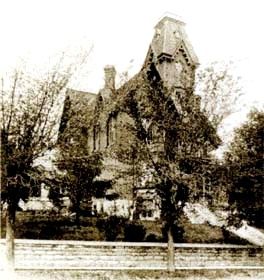 Glick Mansion, 503 North Second Street – Construction on the Glick Mansion began in 1873 by George Washington Glick. Glick had moved to Atchison from Fremont, Ohio in the spring of 1859 with his wife Lizzie Ryder Glick, son Frederick H. and daughter with his Jennie. Soon, he established a law practice with the Honorable Judge Alfred G. Otis under the firm name “Otis & Glick”. When the war between the states broke out, Glick served as a Union soldier in the 2d Kansas Regiment during the Civil War.

In April 1873, Glick purchased two lots for $950.00 and razed a structure that was on the property to begin the building of the mansion. First built in the old Gothic Victorian style, construction of the grand structure would continue for the next 39 years.

Glick was elected to the Kansas Legislature in 1862 and served 14 of the next 18 years in that post. In 1874, Glick also became active in farming and stock raising on his 600-acre “Shannon Hill” farm, which was well known in the area.

In 1879, Lizzie Glick, George’s wife, purchased two adjoining lots north of their home for $1,000 and another building was raised to make room for expansion of the mansion. It was also during this year, that George Washington Glick would become the 9th governor of Kansas, and the first-ever Democratic governor of the state. Though he only remained in office for one term, he continued to remain active in the political arena, as well as being active in local businesses, participating as one of the original founders of the Atchison, Topeka & Santa Fe Railroad.

After years of civic service, George Glick was forced to abandon his political career because of a throat infection that nearly destroyed his ability to speak. He continued, however, as an attorney for various railroads. He also managed his farm and served as a charter member and first vice president of the Kansas Historical Society.

In October of 1909, George deeded the Glick Mansion property to his daughter Jennie and her husband James Orr. Just two years later, at the age of 83, George Washington Glick died on April 13, 1911.

In 1912, James and Jennie Orr began to remodel the home, retaining the appearance of the mansion but transforming it from a Victorian style to the current Tudor Revival Manor style. When James Orr died in February 1927, the mansion was left with Jennie until her death in 1944.

Having no children, the estate was divided among relatives, friends, the First Church of Christ Scientist of Atchison, Kansas and the Atchison, Kansas Public Library. The mansion was then sold by the estate to the local mortician, named William Stanton Jr. in January 1945 for $4,000 dollars. After Mr. Stanton passed away in August 1962, his wife Amelia sold the property to James M. and Christeen Griffith. It passed through several hands until it was purchased by its current owners Ray and Joyce Barmby, he currently owns and operates the beautiful, restored mansion as a Bed and Breakfast Inn.