Trapper, trader, and Indian agent, Joshua Pilcher was born in Culpeper County, Virginia on March 15, 1790, to Joshua and Nancy Fielding Pilcher. When he was five years old, the family moved to Lexington, Kentucky, where Joshua received an education. During the War of 1812, Pilcher was in St. Louis, Missouri, where he worked as a hat maker.

He entered the fur trade business and in 1819, partnered with Manual Lisa and others in the Missouri Fur Company. He worked primarily in Nebraska, where he traded with the Omaha tribe. It was probably about this time that he married an Omaha Indian woman named Poprine Barada with whom he had a son named John Pilcher. His wife died when his son was just little and was raised by Omaha Chief Big Elk.

When Manuel Lisa died in 1820, Joshua became the president and sole owner of the company. However, competition from the Hudson’s Bay Company and the Rocky Mountain Fur Company was increasing, causing financial difficulties for the company. On May 31, 1823, a large Blackfoot war party ambushed Pilcher’s men, killing seven of them and wounding four others. In addition, their traps, pack horses and pelts were stolen resulting in a loss of about $15,000. As a result, Joshua Pilcher pulled his men back from the Northwest, but the ambush caused a death blow for the company. They never returned to the northwest and by the spring of 1824, the Missouri Fur Company was bankrupt.

By 1833 he was working for the American Fur Company and the following year, he became the Upper Missouri Indian Agent. When William Clark died in 1838, Pilcher was appointed by President Martin Van Buren to take his position as the US Superintendent of Indian Affairs at St. Louis, Missouri, a position he held until September 1841. 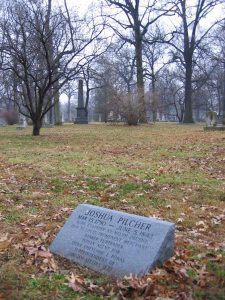 He died at St. Louis, Missouri on June 5, 1843. He was first buried at Christ Church Cemetery, however, when it closed a friend had his remains reinterred at Bellefontaine Cemetery.

Allegedly, Joshua Pilcher was believed to have been wealthy at his death, as he owned real estate and more than 150 slaves. However, his relatives were surprised at his will, which did not mention most of his holdings. The family was never able to solve the estate issues. Pilcher’s wealth is in question though as we have found no clear source that he ever owned slaves.