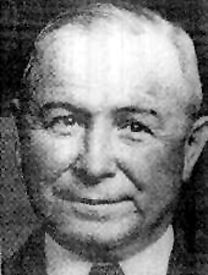 Giovanni “Johnny” Torrio; aka: “The Fox” was An Italian-American mobster who helped build the criminal empire known as the Chicago Outfit in the 1920s.

Torrio was born in Italy in February 1882 and when his father died when he was two years old, he immigrated with his mother to New York City. He grew up in the slums of Manhattan’s Lower East Side and his first job was working in his new stepfather’s grocery store, which was little more than a drinker’s haven. Despite his diminutive size, he became the leader of a group of youths called the James Street Gang while still in his teens. He often clashed with rival gangs and was known to his friends as “Terrible Johnny” for his cold, cruel and calculated manner. he soon went to work for one of the roughest bars in Manhattan as a bouncer. He soon caught the eye of Paolo Vaccarelli (Paul Kelly), the leader of the famous Five Points Gang and in 1905 the James Street Gang was merged into the larger gang. Torrio eventually became Kelly’s lieutenant and learned much from the older man about both crime and legitimate businesses.

By 1912, he formed a splinter organization, focusing his attention on the Brooklyn docks. Here, he ran both legitimate businesses but was also involved in bars, brothels,  bookmaking, loan sharking, drug trafficking and other criminal endeavors. It was during this time that he recruited Al Capone. In the meantime, Torrio had become involved with his uncle, Giacomo “Big Jim” Colosimo, a major crime boss and pimp in Chicago. Torrio soon became Colosimo’s right-hand man but by 1920, the two clashed because Colismo resisted getting into the lucrative alcohol distribution business during Prohibition. Torrio had his uncle killed and took over the operation.

Along with Al Capone, Torrio presided over the Chicago Outfit, controlling gambling, prostitution, and bootlegging and alcohol distribution, making millions of dollars in the process. In 1925, he narrowly escaped being killed by the rival North Side Gang. Torrio was riddled by bullets, taking shots in the jaw, lungs, groin, legs, and abdomen, but amazingly survived. Torrio recovered slowly from his injuries and Al Capone took the lead of the Chicago Outfit. When he recovered, Torrio served a year in jail for Prohibition violations. Afterward, he retired and moved to Europe, though he would remain an “elder statesman” in the world of organized crime, giving advice when necessary. In his later years, he returned New York City and on April 16, 1957, died of a heart attack.