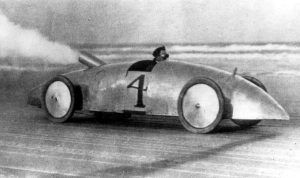 The history of the American automobile during the first decades of the 20th century is, to say the very least, interesting. There were business leaders who created vast empires that viewed the future of the automobile with a sense of optimistic pessimism. There were visionaries whose attempts to transform the world with imaginative innovation were hampered by extreme myopia.

There were also dreamers and charlatans, eccentrics, and intellectual giants. For good measure, the auto industry during this period was also amply sprinkled with men whose genius bordered on insanity.

Together, they transformed the world at unprecedented speed. Together, they unleashed previously unimagined individual freedom while enslaving the masses.

In the beginning, the automobile was a blank canvas for mechanical artisans. In those halcyon days, the automobile held the promise of utopia, a world filled with labor-saving devices and laughter-filled adventures on roads yet built.

From the perspective of the dawning of the second decade of the 21st century, it is difficult to imagine an America without automobiles and highways, car payments and pollution, service stations, and family vacations. It may be even harder to imagine an era when the automobile was such a wonder that it received top billing over the fat lady and albino at the Barnum & Bailey Circus, and astute businessmen such as Montgomery Ward saw the automobile as a fad that children should see before it passed.

To provide a bit of perspective on how the development of the automobile and related infrastructure transformed America, and the world, consider what took place in the three decades between 1900 and 1930. In the closing years of the 19th century, during the nation’s first automobile race, drivers were collapsing from exhaustion after wrestling their automobiles over twenty miles of the fifty-mile course. By 1904, people were driving from coast to coast.

Twenty years later, two decades, in 1929, a mere 4,000 horse-drawn vehicles were manufactured, but the number of automobiles produced had surpassed 1,000,000. Now, imagine what this meant to businesses such as livery stables and blacksmiths, harness makers, and wheelwrights.

Studebaker, the world leader in the manufacture of horse-drawn vehicles in 1890, was one of the nation’s top ten automobile manufacturers in 1929. William Durant, the founder of General Motors, employed Charles Nash as a cushion stuffer at the Flint Wagon Works in the 1890s and as the president of Buick shortly before World War I.

By 1925, there were few aspects of American society left unscathed by the automobile. More families owned automobiles than had indoor plumbing. Introduced by GM, the installment plan had been adopted by other industries launching an unprecedented consumerism-based society and previously unknown levels of personal debt. 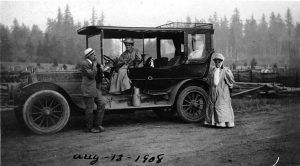 Farmers prospered from the expanded markets made possible with the automobile and trucks. They were also set free from a world of isolation as trips to town were no longer measured in days.

Organized labor propelled industries to provide factory workers with previously unimagined wages and an opportunity to emulate the wealthy with two days per week for the pursuit of leisure. The Sunday drive and the family vacation spawned an explosion in the development of tourism-related industries. Even the American lexicon was transformed with words such as motel.

America’s youth found other ways to embrace the freedom unleashed by the automobile, much to the detriment of currently acceptable societal norms. They also became adept shade tree mechanics and self-taught mechanical engineers, an often overlooked component in the Arsenal of Democracy during World War II.

In 1919, the world’s first tricolor traffic signals were installed on the streets of Detroit. In Woodbridge, New Jersey, in 1929, the first cloverleaf interchange opened.

In 1912, Cadillac proved it was the standard of the world with the introduction of new models that featured as standard equipment an electric starter, and electric lights. It was the death knell for electric vehicles that dominated the urban landscape and for the steam-powered cars that had stunned the world with previously unimaginable speed records.

In 1919, Essex became the first low price, mass-produced models available with fixed tops and roll-up windows, an enclosed sedan. Yet, it would be 1947 that heaters became a factory-installed option for Chevrolet trucks.

On the 1918 McFarland, customers could order the optional heated steering wheel. Meanwhile, Henry Ford and other manufacturers took out full-page advertisements that proclaimed brakes on the front wheels were dangerous.

In luxury cars of the late 1920s, the pampered and wealthy enjoyed the luxury of an optional radio to provide a theme song for the adventure on the open road. But, incredibly, it would be the late 1950s before some manufacturers offered turn signals as standard equipment.

The first automobile recall occurred in 1921 when Chevrolet introduced a trouble-prone air-cooled model that almost served as the companies’ swan song. The genius behind the debacle was Charles Kettering, the man who developed the electric starter for Cadillac, Freon for refrigeration, Duco automotive paints, and leaded gasoline that enabled the manufacture of high compression engines.

It was an age of astounding technological development. The limited production, steam-powered Doble offered unparalleled luxury and mind-numbing speeds (0 to 70 in nine seconds for a 4,500-pound roadster).

However, the buyer of a new Ford received a wooden measuring stick that he inserted in the gasoline tank under the front seat cushion to determine fuel levels. Other manufacturers offered a modern type fuel gauge couple to an electric sending unit, but these were mounted on the gas tank at the rear of the car. 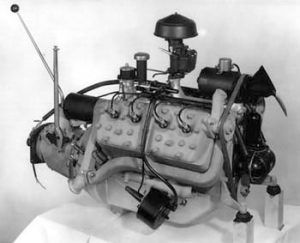 By the close of World I, customers could choose between four-cylinder models or V-8 engines (even in a Chevrolet), hybrids or steamers, electrics, or two-cylinder cyclecars. A dozen years later, they could, if they had the money, even select models with 12 or 16 cylinder models or turbocharged eight-cylinder behemoths. Yet some manufacturers steadfastly held to the belief that brakes on the front wheels represented a danger, and others clung to the belief that mechanical brakes were safer than hydraulic systems.

In two short decades, America became an automobile-obsessed nation. Yet, within three decades, the automobile had become the very cornerstone of the nation.

Now, a century later, the automobile is the scapegoat, a necessary evil. Now, the automobile is viewed as a tether that keeps mankind from that long-promised utopia where the lion lays with the lamb, and the skies are not cloudy all day.

My how times change.