The uniqueness of this national park is the result of natural processes that are not duplicated on this scale anywhere else in the world. Here, along the 300-mile long lake, glacial sands were deposited from the east and west sides to form 250 foot high dunes under the power of strong north winds and high waves rivaling the ocean. The resulting environment is a unique series of long dunes separated by marshes. 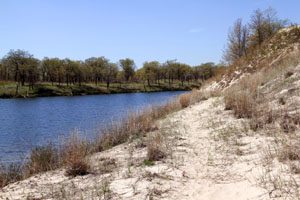 Here visitors enjoy water activities, hiking and biking trails, bird-watching, camping, fishing, horseback riding, and cross-country skiing and snowshoeing in the winter. Historic landmarks can be seen at Bailly Homestead, a pioneer trading post established in 1822; the Chellberg Farm that reflects the challenges of sustainable agricultural success in the sandy dunes; and the Good Fellow Youth Camp, a historic 1940s summer camp. Additionally, the park offers over 400 interpretive programs and ranger-led walks and talks in various locations throughout the year.

Before Europeans arrived and began to explore America, archeological evidence suggests that this area first was used as seasonal hunting camps by Native Americans. The first permanent camps were in the Ohio Valley settled by the Hopewell culture. Five groups of mounds have been documented in the dunes area, that are thought to have been built between 200 BC and 800 AD.

Beginning in the 1500s, European exploration and trade introduced more changes to the area and many tribes began to move westward. However, others, seeking to dominate large geographic trading areas remained. 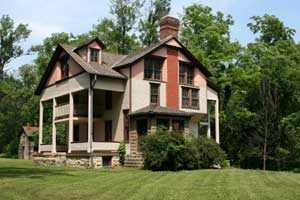 It wasn’t until the 19th century that native villages once again were scattered through the region, but this was soon followed by European settlements. Joseph Bailly, who moved to the dunes from the Niles, Michigan area was the earliest recorded settler. Settling along the Calumet River, he was soon joined by a series of other settlers and before long, new communities began to spring up including Chesterton, Porter, Tremont, and the Town of the Pines.

Indiana Dunes National Lakeshore was established in 1966 after more than 60 years of preservation attempts that began in 1899.

At that time, Henry Cowles, a botanist from the University of Chicago published an article in the Botanical Gazette bringing international attention to the site that inspired the efforts to preserve the intricate ecosystems existing on the dunes.

Years later, Cowles and several others formed the Prairie Club of Chicago in 1908, which was the first group to propose that a portion of the Indiana Dunes be protected from commercial interests and maintained in its pristine condition for the enjoyment of the people.

However, it was not enough to curtail the struggle between industry and preservation. By 1916, the region was booming with steel mills and power plants. The 200-foot high 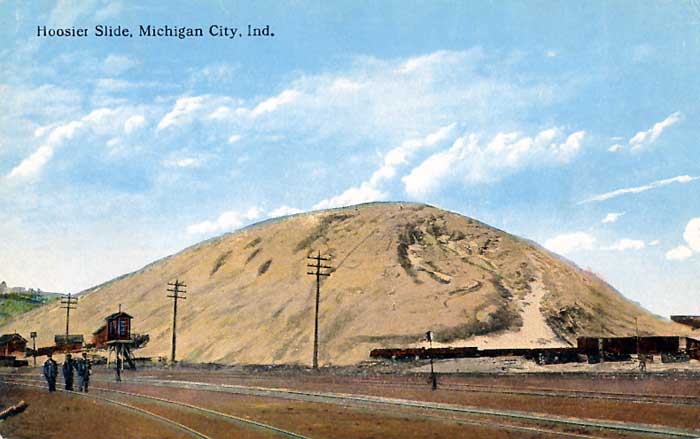 Slide, for example, was the largest sand dune on Indiana’s lakeshore and one of the state’s most famous natural landmarks. A popular tourist attraction, people enjoyed climbing up and sliding down the dune, which also had a picnic spot at the top.

In the 19th century, the dune had trees and berries and cows even grazed there. But, over the years, trees were cut and used and probably by about 1870, the dune was bare. Commercial sand mining began in about 1890 when the sand was found to be suitable for making glass. The Monon Railroad built a switching track along the south side of the dune, to serve the lumber docks along the west side of the harbor. In addition, railroad cars were filled and the sand was shipped as far away as Mexico. In a period of thirty years, more than 13.5 million tons of sand were shipped, effectively leveling the dune. The dune once stood where the NIPSCO generating station is now.

Out of the Prairie Club of Chicago came the precursor to the current park — The National Dunes Park Association, formed in 1917 which attempted to make the dunes a national park. However, the battle for a national park was crippled when the United States entered the First World War.

In 1926, after a ten-year petition by the State of Indiana to preserve the dunes, the Indiana Dunes State Park opened to the public. Relatively small in size at the time, the push for a national park continued in the next decades. 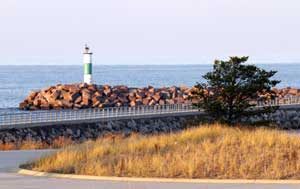 However, there were politicians and businessmen who desired to maximize economic development by obtaining federal funds to construct a “Port of Indiana.” These men were eager to exploit the economic prosperity promised by linking the Great Lakes to the Atlantic Ocean shipping lanes via the St. Lawrence Seaway.

In the summer of 1961, those fighting to save the dunes began to see greater possibilities for hope. President John F. Kennedy supported congressional authorization for Cape Cod National Seashore in Massachusetts, which marked the first time federal monies would be used to purchase natural parkland. President Kennedy also took a stand on the National Lakeshore, outlining a program to link the nation’s economic vitality to a movement for the conservation of the natural environment.

This program, called The Kennedy Compromise, entailed the creation of a national lakeshore and a port to satisfy industrial needs. In the end, the Port of Indiana-Burns Harbor was established in 1965 and the next year, Congress passed a bill that made the Indiana Dunes National Lakeshore a reality.

The national lakeshore now borders the Port of Indiana-Burns Harbor on three sides. Over the years, the original designation of 8,330 acres of land and water, has increased the size of the park to more than 15,000 acres. 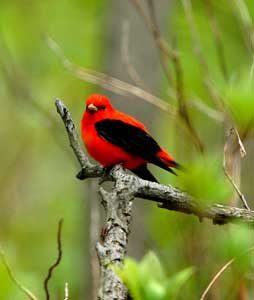 Scarlet Tanager at Indiana Dunes by the National Park Service.