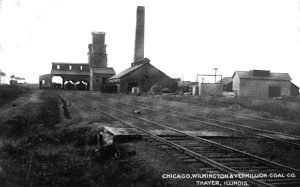 Moving south along Illinois State Route 4, visitors enter what was once a rich coal mining country. Beginning in the 1860s, coal mines and boom camps sprang up all over the area bringing in immigrants from around the world. By 1910, there were 22 operating mines in Macoupin County to the south of Thayer, 17 of which were shipping hundreds of train cars filled with ore to larger industrial centers.

Thayer had one mine, Virden had 21, Girard – nine, Nilwood – 16, Carlinville – 14, Gillespie had seven, and Staunton had 12. During the coal mining heydays, the region would also become an area of dissension, as life was difficult for miners and their families. Complaints regarding the dangerous and dirty work, stale, dusty air, noxious fumes, and pay issues soon led the miners to unionize. 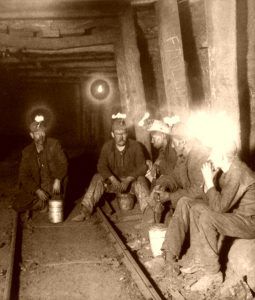 During these turbulent years, several strikes occurred, leading to violence and riots.  In October 1898, the Virden Mine Riot erupted between guards and miners following the arrival of some 2,000 African American workers from Alabama who were hired to break a strike by local workers. The riot culminated in the deaths of 13 men.

Though the many coal mines of the earlier era are long gone along the original Route 4 alignment, which was Route 66 from 1926 to 1930, these many small towns still reflect their coal mining roots. From Thayer south, the old road is dotted with classic villages featuring small businesses and public squares. 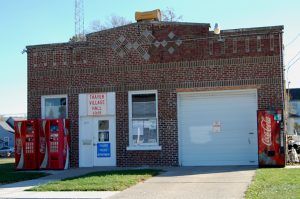 A latecomer to the area’s coal mining industry, Thayer began when the Chicago, Wilmington & Vermilion Coal Company bought mining lands in the southern part of Sangamon County in 1900. Mine Superintendent Ruffin D. Fletcherson oversaw the building of the mines and platted out the town of Thayer. He also supervised the building of 86 homes for the miners, which he made possible for the miners to own, and built a 26 room hotel, his own handsome residence, and a large store building.

The Chicago, Wilmington, and Vermillion Coal Company was formed in 1866 by wealthy investors from Boston and Chicago. Having had several earlier successes in the region, the company wasted no time sinking the first coal shaft in June 1900. By the following January, the mine produced 250 tons a day. By December 1901, the mine’s daily capacity was 2,000 tons. Described as a “wonder” and “first-class,” the plant was one of the best equipped in the state. However, it soon played out like all other mining operations, and the mine was closed in 1914.

Like other towns along old Route 66, Thayer also played a small part in the gangster era of the 1930s. Home to Byron “Monty” Bolton, a member of the Barker-Karpis Gang, his boyhood home was searched during an FBI investigation. He was arrested in January 1935 in Chicago and spilled the “beans” about many of the gang’s activities, including giving up the location of Ma and Freddie Barker’s hideout in Florida. He later claimed to have taken part in the St. Valentine’s Day Massacre. 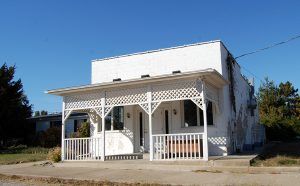 Today, Thayer, located just 4.5 short miles south of Auburn, is called home to about 700 people. There are a few interesting buildings in its tiny downtown area. For a bite to eat, Maggie’s in Thayer is located at 310 E. Ebony Street. Here, you will not only get a good meal but also a peek at the region’s past as historic photographs line the walls.

Continue your Route 66 journey on Illinois State Route 4 to Virden, just about two more miles down the path.