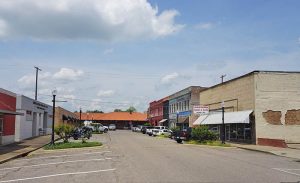 The town used to even have a watermelon water tower, but it’s now painted white, some say to give the town a more “respectable” look in honor of Clinton. Darn!!! That would have been a great photo opportunity!

In any event, watermelons have long been a calling card for the City of Hope with its watermelon festival dating back to the 1920s and continuing to draw as many as 50,000 people during its four day August event, to spit, dribble, crunch, and slice their way through a whole bunch of the fabulous fruit.

The festival features not only lots of watermelon for your eating pleasure, but arts and crafts booths, more food — including burgers, pork rinds, fried catfish, and chicken-on-a-stick, to a wide variety of musical talent. But the best part of the festival is the Watermelon Olympics where local teams are pitted against each other in such events as a seed-spitting contest, watermelon-eating contest, watermelon auction, and a contest to see who can grow the biggest melon, some easily tipping the scales at more than 200 pounds. 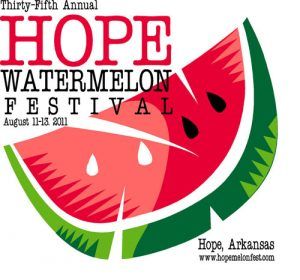 Hope, Arkansas is the county seat of Hempstead County, with a population of about 9,500. It is located in the southwest corner of the state, about 25 miles northeast of Texarkana.