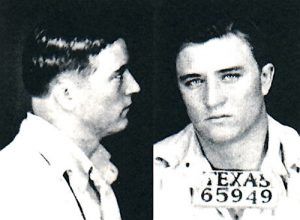 Henry Methvin was an outlaw member of the Barrow Gang.

Methvin was born on April 8, 1912. He hooked up with the Barrow Gang and was one of the men freed by Clyde Barrow and Bonnie Parker in the Eastham Prison Raid in Texas in 1934. Methvin, on the run with Bonnie and Clyde, went on a crime spree with the pair and immediately following the murders in Grapevine, Texas of two highway patrolmen, the trio’s vehicle became stuck in the mud near Commerce, Oklahoma. When they attempted to flag down a passing motorist at gunpoint, the driver stepped on the gas and notified authorities. Police Chief Percy Boyd and Constable Cal Campbell went to the location to investigate and in the gun battle that ensued, Campbell was killed and Boyd shot in the head, but survived.

As the outlaws continued to run, Henry’s father made a deal with the police that he would help set up an ambush for Bonnie and Clyde, if  Henry would be pardoned in Texas. The police agreed and Bonnie and Clyde were killed on May 23, 1934. It is likely that Henry knew or at least suspected the ambush as his father specifically told him not to go with them that morning. The police kept their word and Methvin was pardoned in Texas. However, he was not pardoned in Oklahoma for the death of Constable Cal Campbell. He was given the death sentence for the murder but after an appeal in 1936, his sentence was reduced to life. After ten years he was released and made his way to Sulphur, Louisiana. On April 19, 1948, he was cut in half by a railroad train. The circumstances of how he made his way to the railroad tracks are unknown. He was buried at the Social Springs Cemetery in Hall Summit, Louisiana.