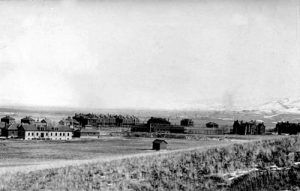 Authorized by Congress in May 1892, Fort William Henry Harrison was established as part of a greater consolidation program to close a number of smaller installations which would be replaced by just a few larger posts where troops would be concentrated.

It was first called Fort Harrison after the sitting President Benjamin Harrison. It was garrisoned with troops from Fort Assinniboine in September 1895. Some years later in 1906, the name was changed to Fort William Henry Harrison because it was discovered that there had already been an Army fort named for Benjamin Harrison in Indianapolis, Indiana. The second name honored William Henry Harrison who was a soldier, governor, and Congressman who served just one month as President of the United States in 1841 before succumbing to pneumonia.

The U.S. Army troops were withdrawn in 1913, the government retained the land. Subsequent history included being used as a mustering site for Montana troops bound for France in 1917, Veteran’s Administration facilities beginning in 1922, as a training site for National Guardsmen between the two world wars. It is probably best known as the home base of the First Special Service Force, known as the “Devil’s Brigade,” in 1942 and 1943.

Today the site continues to house the Montana National Guard, U.S. Army Reserve, and U.S. Navy Reserve, as well as a growing Veterans Administration facility. Some of the fort’s original buildings including Officer’s Quarters, barracks, and the parade ground are located toward the back o the compound. There is a museum on the site but is only open 1-2 days per week. The post is located on the west side of Helena, Montana off of Hwy 12.