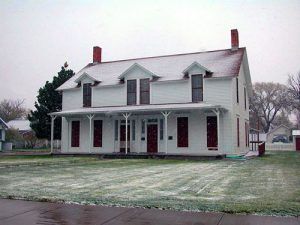 Fort Sidney, Nebraska, first called Sidney Barracks, was established in 1867 with a primary function of protecting the Union Pacific Railroad workers against the threat of hostile Indians.

In 1869 the post was relocated to the present site at Sidney, Nebraska, and the following year it was renamed, Fort Sidney. In the mid-1870s the post became a major strategic point as the initial supply depot on the Sidney-Blackhills Trail. Throughout the mid-1870s, supplies and passengers traveled the trail to the Red Cloud Indian Agency and beyond to the Black Hills goldfields. By 1875 the fort contained quarters for three companies, five officers quarters, a hospital, guardhouse, bakery, laundry, stables, and other structures.

In 1878 troops from Fort Sidney were called in to participate in the search for Chief Dull Knife’s Cheyenne people who had escaped from their reservation in Oklahoma, and who were later recaptured near Fort Robinson, Nebraska. With the Indians subdued, Fort Sidney was closed in 1894 and most of the buildings were sold.

Today, the Fort Sidney Complex includes the Post Commanders Home built in 1871, a Double-Set of Married Officers Quarters, which now houses the Cheyenne County Museum, built in 1884, and the 1872 Powder House, all located now in a residential area of the town. To the southeast are the remains of the fort’s rifle range. The restored buildings have been refurbished with authentic articles of the late 1800s and are listed in the National Register of Historic Places. The museum is located at 6th and Jackson Streets in Sidney, Nebraska.