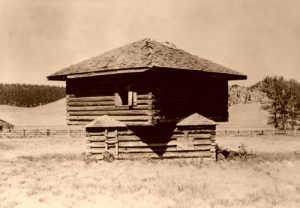 Its objective was to the protect the Fort Benton to Helena freight road, as well as the area miners and settlers. The fort provided troops for many of the campaigns in western Montana, including the Nez Perce War in 1877.

In 1878, the post was renamed Fort Logan in honor of Captain William Logan who was killed at the Battle of the Big Hole. The fort was abandoned in 1880.

There are still remains of the fort including a deteriorating adobe storehouse, two officers’ quarters’ buildings, and the blockhouse. The site is located in Meagher County, on an unimproved road, about 20 miles northwest of the town of White Sulphur Springs, Montana.