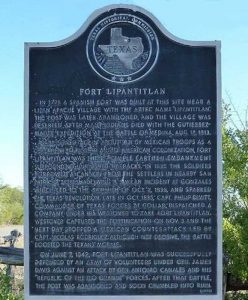 Fort Lipantitlan, Texas was established in 1825 by José M. J. Carbajal and was named for the Lipan Apache Indians, who had long used the site as a campground.

It was built on the west bank of the Nueces River about three miles upstream from the old town of San Patricio, in present-day Nueces County. Prior to Carbajal’s fort, an old presidio had been built there as early as 1734, but it was completely gone when Fort Lipantitlan was established to restrict Anglo immigration into Texas. The fort was initially a simple embankment of earth with cannons mounted on each of the four parapets and lined within by fence-rails. Later, several buildings and at least one barracks were built surrounding the embankments.

Though simple, it was garrisoned with as many as 80-120 men. During the Texas Revolution, the Mexicans were defeated in the Battle of Lipantitlan in November 1835, and the buildings were burned. However, because the Texans did not occupy the fort after their victory, Mexican forces continued to use the old fort occasionally. After the Mexican-American War put an end to Mexican troops in Texas, Fort Lipantitlan was abandoned.

Archeological digs in the mid-1980s, uncovered numerous artifacts, including items from Native Americans, Spanish, Mexican and Texan military, and household articles from a settlement that grew up around the fort. It is now a Texas State Historic Site in northwestern Nueces County, about 15 miles from Lake Corpus Christi State Park, but no traces of the earthen embankments remain.