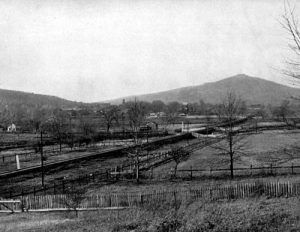 Fort Hovey, Missouri, also called Fort Curtis, this fortress was a small Civil War era earth-and-wood post built on a hill overlooking the junction of the road that connected Ironton and Pilot Knob with Fredericktown in 1863.

The fort’s objective was to protect the Arcadia Valley and the iron mines located on Pilot Knob Mountain. It was initially named Fort Hovey in honor of Union Colonel Charles E. Hovey, who commanded the 33rd Illinois Volunteer Infantry, who built the fort in the winter of 1861-62.

After the Union victory led by Brigadier General Samuel R. Curtis at the Battle of Pea Ridge, Arkansas on March 8, 1862, the post was renamed Fort Curtis in his honor. The fort continued to be occupied until Confederate troops advanced into Missouri in 1864. The fort was then abandoned because it was too far from the rail terminus and supply depot in Pilot Knob. The Union troops were relocated to Fort Davidson, about 2 ½ miles north of the town of Pilot Knob. Fort Curtis was briefly used as an observation post by Confederate Soldiers just before, during and shortly after the Battle of Pilot Knob.

Though there is nothing left of the fort today, the site is designated with a historical marker located on the Arcadia Valley United Presbyterian Church ground at Church and Spring Streets in Arcadia, Missouri.