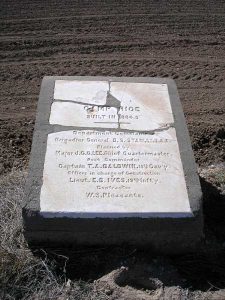 Fort Hancock, Texas, was first established as Camp Rice in 1881 as a sub-post to Fort Davis. Its purpose was to defend the area against Indians and bandits from across the Rio Grande.

The post was situated along the San Antonio-El Paso Road. Camp Rice was formerly located at Fort Quitman and was established by troops of the 10th U.S. Cavalry “Buffalo Soldiers.” Camp Rice did not grow after moving to this community and rarely hosted more than 60 men. After the death of Union Major General Winfield Scott Hancock in 1886, the post was renamed in his honor.

At that time, the fort was commanded by Captain Theodore A. Baldwin, and the Tenth United States Cavalry formed the first garrison of the independent post. Afterward, it was garrisoned by mixed detachments of infantry. These troops patrolled the Rio Grande to prevent illegal crossings by smugglers, Mexican bandits, or insurrectionists.

The fort was damaged in a flood that year but rebuilt. It was damaged again by fires in 1889 and then abandoned in 1895. The site was located in what is now a cotton field about 1.5 miles west of the town of Fort Hancock.