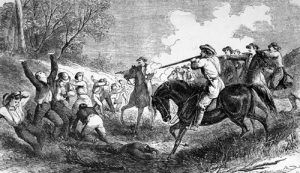 Fort Hamilton, Kansas, in Linn County, was not an official military fort. In 1858, it was a stronghold of Charles A. Hamilton, a pro-slavery advocate living in Missouri.

Around Trading Post, Kansas, located on the Marais des Cygnes River, a bitter pro-slavery settlement had grown up, the leader of which was Charles A. Hamilton and other men from Missouri often crossed the border into Kansas and conducted raids during the Kansas-Missouri Border War. The “fort” was a substantial log cabin near an elevation known as Sugar Mound.

James Montgomery, the acknowledged leader of the free-state men in the county, was determined to break up this gang. He began by emptying the contents of several barrels of whiskey on hand at the “doggery” and leaving a notice for the ruffians to quit Kansas Territory.

On the morning of May 19, 1858, Hamilton led 30 men in the Marais des Cygnes Massacre, a deadly assault on Free-State supporters in Kansas. The Missourians captured 11 free-state men, nearly all of whom were known to Hamilton or some member of his party. They were not known to have taken an active part in the disputes, and having been neighbors of Hamilton, they had no suspicion that he meant to harm them, especially as they were guilty of no offense but that of being free-state men.

The invaders then marched their captors to a ravine and opened fire. Five men were killed, five severely injured, and one managed to escape unharmed.

Soon after the massacre, Hamilton left the area and returned to his home state of Georgia. The “fort” was then taken over by free-state men and was occupied by Captain Weaver’s company of some 30 men who named it Fort Hamilton.

Hamilton was never convicted or charged with the crimes in Kansas.