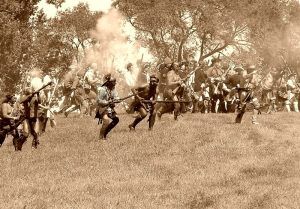 Fort Granville, Pennsylvania was established during the French and Indian War on the north bank of the Juniata River near present-day Lewistown.

After the French victory in the Battle of the Monongahela, Pennsylvania on July 9, 1755, English settlers on the Pennsylvania frontier were exposed to hostile raids from their adversaries of the French and their Indian allies. As the Shawnee and Delaware Indians grew bolder in their excursions in the frontier, the provincial government decided to build a string of forts across Pennsylvania from the Delaware Water Gap to the Maryland line.

The fort was built by the Pennsylvania Militia led by Captain George Croghan in December 1755. The post was a 100-foot square stockade with a blockhouse on two of its corners and enclosed a barracks that could house 50 men. It was named for John Carteret, the Earl of Granville.

On July 22, 1756, the French and their Indians allies challenged the fort and demanded its surrender. When Captain Edward Ward refused their demands, the attackers plundered the farms of a Mr. Baskin and then Hugh Carroll, and took them prisoners. On July 30th, Captain Ward and the majority of his men left the fort to journey to Shearman’s Valley to protect harvesters. The fort was left under the command of Lieutenant Edward Armstrong, supervising 24 troops. On August 2nd the fort was attacked by a raiding party of 55 Frenchmen and 100 of their Indian allies under French Captain Louis Coulon de Villiers. The small force held out until the next morning when it was surrendered by Sergeant John Turner, after the fort had been set on fire. Lieutenant Edward Armstrong was killed.

After the surrender, Sergeant Turner, 22 soldiers, three women, and seven children were loaded-up and taken to Kittanning. Upon their arrival, Turner was then scalped alive and burned at the stake. The remaining captives were taken to Fort de Chartres where they were ransomed by French officers and eventually returned to the American colonies. 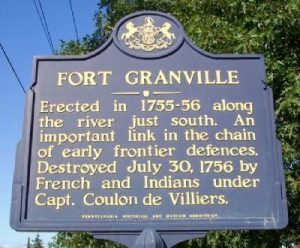 The fall of Fort Granville confirmed the vulnerability of the string of forts on the western frontier of Pennsylvania.

Though it is known that the site was about a mile from Lewistown, the exact location can no longer be determined, as the construction of the Pennsylvania Canal destroyed the spring around 1829.