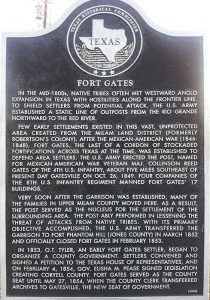 Fort Gates, Texas, originally called Camp Gates, was established by Captain William R. Montgomery on October 26, 1849, as a stockaded United States cantonment on the north bank of the Leon River above Coryell Creek, about five miles east of the site of present-day Gatesville. It was named for Brevet Major Collinson Reed Gates, who won distinction in the battles of Palo Alto and Resaca de la Palma in the Mexican-American War. Gates died in Fredericksburg, Texas the same year and was buried at Fort Martin Scott (hat tip to commenter Mark Wieser).

Built to protect the settlers from Indian attacks, the post would contain 18 buildings, including four officers’ quarters, barracks, laundries, storehouses, a guardhouse, baker, blacksmith shop, and more. By 1850, the soldiers and officers numbered about 100 men. By the following year, it had grown to more than 300.

In March 1852, the Indian threat had been removed and Fort Gates was the first of the line of posts to be evacuated. Within a few years, the buildings deteriorated and there is nothing left of the fort today.