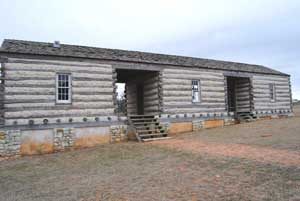 Fort Martin Scott, initially called Camp Houston, was one of the first federal forts on the frontier of Texas.

Established in December 1848 by Captain Seth Eastman and two companies of infantry, the post was located two miles southeast of Fredericksburg on Barons Creek. Its objective was to protect travelers and settlers along the Fredericksburg-San Antonio Road from Indian attacks. The post was renamed in December 1849 for Major Martin Scott, who was killed at the battle of Molina del Rey in 1847. The German settlers who had established nearby Fredericksburg had privately established a lasting treaty with the local Comanche Indians in 1847, but the treaty did not apply to settlers living outside the community.

Indians, who actively traded with the German settlers, were often involved in skirmishes as they traveled to and from Fredericksburg. As more and more white families immigrated to and traveled through the region, it very nearly led to open warfare in 1850. To avoid this, several tribes, along with Indian agent, John Rollins, escorted by the Second Dragoons from Fort Martin Scott, met near the San Saba River. The meeting resulted in the Fort Martin Scott Treaty, which improved the situation enough to prevent open hostilities. In the next several years, it became less and less necessary to protect civilians from Indian attacks and the fort was closed in December 1853. During the Civil War, the post remained unoccupied, but afterward, in September 1866 was filled again with federal troops under orders from General Philip Sheridan. The occupation was brief; however, and was abandoned by the end of the year. 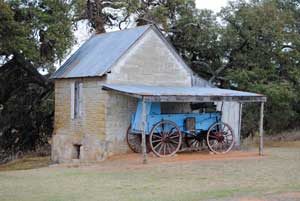 In 1986, the Fredericksburg Heritage Federation began to develop the site into a park and reconstructed several of the buildings including the post commander’s quarters, six buildings of officers’ housing, sutler’s store and warehouse, laundry, bakery, hospital, three barracks, quartermaster’s warehouse, a stable with barn, and a blacksmith shop. The guardhouse, made of cut limestone, is the only surviving building from the original fort. The site is located two miles east of Fredericksburg on U.S. 290.