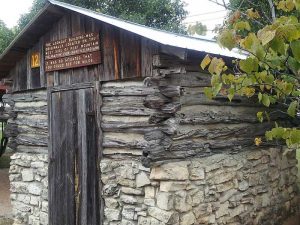 Fort Croghan, Texas was was located on Hamilton Creek three miles south of present-day Burnet. The location was chosen when Henry E. McCulloch and his Texas Rangers were stationed there in March 1849. It was first called Culloch’s Station. Just a few months later, in October, the site of a permanent fort was planned to be built across the Hamilton Creek, three miles above the first site. It was then named Camp Croghan in honor of Colonel George Croghan. Later the name was changed to Camp Hamilton and when complete, officially named Fort Croghan. The buildings were all built of logs and included four officers’ quarters and a large four-room hospital.

The post became headquarters of the Second Dragoons in 1852, but the very next year, troops began to be moved, leaving behind just a skeleton crew to guard the buildings. It was abandoned in 1855 and the buildings were used as residences.

By 1940 only the foundations remained as evidence of the military occupation. A decade later; however, the Burnet County Historical Society began the reconstruction of the old post. Similar old buildings in the area, including two log dwellings and a stone structure, were moved from their original locations to the fort site and restored to appear as they might have during the days of the fort’s occupation.