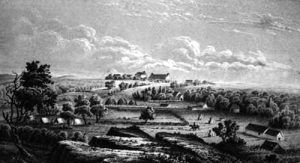 Fort Chadbourne, Texas was one of an outer ring of posts founded in the early 1850s to protect the Texas frontier from plundering Kiowa and Comanche Indians. Other forts in the ring were Forts Belknap, Phantom Hill, McKavett, and Clark. The post was built by companies A and K of the Eighth United States Infantry in 1852 and named for 2nd Lieutenant Theodore Lincoln Chadbourne who fought and was killed in the Mexican-American War in the Battle of Resaca de la Palma.

From 1858 until 1861 Fort Chadbourne was division headquarters for the Butterfield’s Overland Mail. During the Civil War, Confederate troops periodically occupied the fort.

Union troops returned in May 1867 but, remained only until December, when Fort Concho was established not far to the south. Fort Chadbourne; however, continued to serve as a station on the San Antonio-El Paso stage line and the Army sometimes used it as a sub-post.

In 1999, the Fort Chadbourne Foundation was established to preserve, stabilize, and partially restore the historic site and present it to the public. The fort site now features a 12,500 square foot visitor center that houses many of the artifacts found at the fort. Foundation officials tell us that you can start your visit with a 20 minute Emmy Award-Winning Video “The Lost Fort”, which introduces you to Fort Chadbourne. Other features include a stagecoach, antique gun collection, Medal of Honor tribute, buffalo hunting display and more.

And of course, there is the tour of the fort grounds itself, which include the walls of four limestone buildings, two barracks and two officers’ quarters, stand in their entirety, as well as several partial walls. Piles of stone rubble outline other structures. One of the barracks has been re-roofed and is used as a cattle barn. 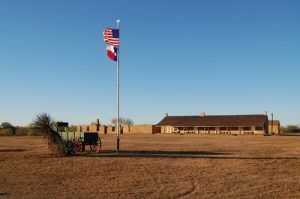 The old post is located in Coke County, just off U.S. 277, about 2 ½ miles north of its junction with Texas Highway 70, some four miles northeast of the town of Fort Chadbourne.