El Morro National Monument in Cibola County, New Mexico, preserves the remains of a large prehistoric pueblo atop a great sandstone promontory with a pool of water at its base, which later became a landmark where many centuries of explorers and travelers left historic inscriptions that survive today. 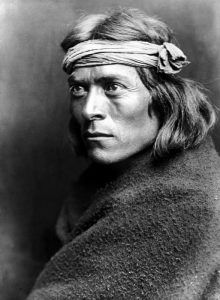 The monument, located on an ancient east-west trail in the western part of the state, displays over 2,000 carvings at the base of a sandstone bluff that records the presence of ancient peoples and later travelers who transformed El Morro into a well-preserved historical document. Each pre-Columbian petroglyph and later signatures, dates, and messages inscribed at El Morro has a unique and significant story to tell about the peoples of different cultures who were there. Until the turn of the 20th-century, people left their mark at the base of this monument, including the Zuñi Indians whose ancestral ruins stand at the top of this historic headland, the Spanish and Americans. Today, El Morro National Monument preserves the ruins and petroglyphs of the Ancestral Puebloans and the Spanish and Americans’ inscriptions who took inspiration from the ancestral Zuñi scribes. Archeological investigations of Spanish exploration and Latino heritage connections to the region are ongoing and contribute to our understanding of El Morro’s long cultural and historical significance.

Attracted by the permanent pool of fresh drinking water formed from rain and melted snow, Ancestral Puebloans established their village atop El Morro in the late 1200s. The Zuñi Indians call this place Atsinna, meaning “place of writings on the rock.” The sacred Puebloan ruins at the site offer great insight into the culture of the Zuñis and their ancestors. Believed to have formed about 2,000 years ago, the Puebloan culture consisted of skilled farmers and master builders, whose earliest structures were mostly underground pit houses. Eventually, their pueblos evolved into above-ground multi-storied towns the people constructed using flat sedimentary rocks piled one on top of another and cemented with clay. The Atsinna ruins archeologists unearthed in the 1950s demonstrate the advanced building skills of these Ancestral Puebloans. 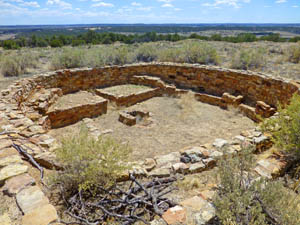 Until its abandonment in about 1400, this 200 by 300-foot pueblo above El Morro could house between 300-400 Puebloan in the 355 interconnecting rooms that surround the open courtyard. Still visible today are the square and circular underground kivas within the Atsinna courtyard the Zuñi ancestors built. Here, they performed religious ceremonies to bring rain and abundant crops, which traditionally consisted of corn, beans, and squash. As skilled farmers, the Atsinna community grew crops in fields the people irrigated with the rainwater collected in cisterns atop the mesa. The Ancestral Puebloans also irrigated their fields with the water from the pool located at the bottom of the headland, which they reached by using still evident hand and toe steps etched into the face of the cliff. For reasons still debated, the Puebloans left El Morro for the Zuñi pueblos the Spanish encountered in 1540.

Although the Ancestral Puebloans abandoned Atsinna long before the Spanish arrived, the petroglyphs they left behind inspired Don Juan de Oñate on April 16, 1605, to record his stay at El Estanque de Peñol, which is Spanish for “pool at the great rock.” His name is the first of thousands of Spanish inscriptions carved at El Morro, most of which include the standard phrase paso por aqui or passed through here, followed by the traveler’s name and date of passage. Together, these inscriptions tell over 200 years of New Mexico’s Spanish history, including the Reconquista of Don Diego de Vargas, who recorded the Spanish reconquest following the Pueblo Indian revolt in 1692. Eventually, as America began fulfilling its Manifest Destiny by expanding westward, a new generation of explorers attracted to the dependable water source at El Morro would record over 50 years of American expansion in the southwestern United States. 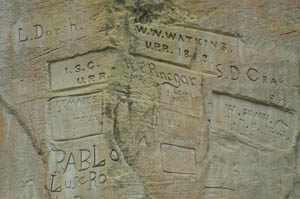 After the United States acquired New Mexico at the end of the Mexican-American War (1846-48), Lieutenant James H. Simpson, a topographical engineer for the US Army, immediately began surveying the Zuñi and Navajo territory. In September 1849, he came across the beautiful inscriptions of El Morro, and he and artist Richard Kern, who was also on the expedition, began copying the symbols, signatures, and dates carved by those who had passed by the impressive headland that Simpson called Inscription Rock. Their work became the first written description and drawings to record El Morro’s history, and like those who passed there before them, Simpson and Kern left their own marks on Inscription Rock. Their inscriptions are two of more than 20 Anglo-American names carved at the base of El Morro. As trains facilitated travel across the Southwest, the historical record at Inscription Rock began to fade as the passage through El Morro became unnecessary.

A 1906 federal law prohibited further carving at El Morro, but tourists can take photographs of the beautiful historical inscriptions to record their own passage through El Morro National Monument. Visitors may start their tour at the visitor center, where the Inscription and Mesa Top trails begin. On the ½-mile Inscription Trail, visitors can see the precontact petroglyphs and hundreds of Spanish and Anglo inscriptions at El Morro. When hiking the two-mile Mesa Top Trail, tourists can appreciate the Zuñi Mountains’ views, the volcanoes of El Malpais, and El Morro Valley. On the Mesa Top Trail, visitors can also tour the partially excavated Ancestral Puebloan ruin, Atsinna, or “place of writings on rock.” 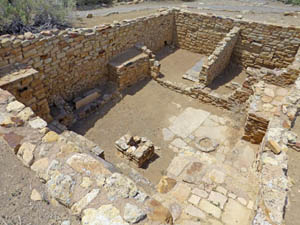 Atsinna Pueblo at the El Morro National Monument in New Mexico by the National Park Service.

At the visitor center, an orientation video and virtual tours on the center’s computers prepare visitors for what they will see. Camping is available at the nine-site campground, and picnicking at the tables near the visitor center is also popular.