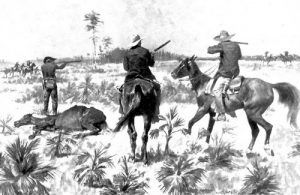 The Early-Hasley Feud was a family feud in Bell County, Texas that occurred after the Civil War.

Leading the Early faction was John Early, who during the Civil War, was a member of the Texas Home Guard, an organization formed to protect Texas lands while the younger men were off fighting the war. For whatever reason, Early abused an old man named Drew Halsey while his son, Samuel was off to war. When Sam returned from his service in the Confederate Army, he was incensed at Early’s treatment of his father and took the matter into his own hands.

In the meantime, Early had also chosen to become a supporter of the Union after the Rebels had been defeated. Texas, the last stronghold of Confederate forces; however, had thousands of people who still supported the Confederacy, refusing to adhere to the new ideals and laws implemented during Reconstruction. Hasley soon became the head of a party of friends and relatives that openly opposed the Yankees and their forced policies. Before long, Hasley and his friends, including a man named Jim McRae, a known outlaw, were accused of all manner of desperate deeds including thievery and other criminal activities. Early soon convinced the Union soldiers to “clean out” the Hasley faction. 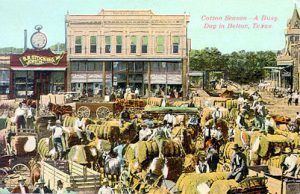 On July 30, 1869, Jim McRae was ambushed and killed. Afterward, the Hasley party disbanded; however, one of the members pursued Dr. Calvin Clark, an Early supporter, into Arkansas and killed him shortly thereafter. Though the “feud” was over, Sam Hasley continued to have a reputation as a troublemaker. In the fall of 1889, he was drunk and creating a ruckus in Belton, Texas. When Deputy Marshal William “Cap” Light ordered him to go home, Hasley ignored him and began to ride his horse on the sidewalk, daring Light to do something about it. Light responded by attempting to arrest the wayward Hasley. But when Sam pulled out his gun, Light had little choice to respond and shot Hasley dead.