The Daly Gang of thugs operated out an Aurora, Nevada saloon between 1862 and 1864.

Though called the Daly Gang, the mastermind behind the group was actually “Three-Fingered Jack” McDowell, who, along with John Daly, operated anThe saloon quickly became known as a place where beatings, gunfights, mayhem, and murder were the norm. McDowell, Daly, and two other men named William Buckley and Jim Masterson bullied the town and cheated any card players that were foolish enough to frequent McDowell’s saloon. If a customer complained about the bullies or the underhandedness of the establishment, the gunmen took matters into their own hands. In addition to “ruling” the saloon with an iron fist, the outlaws terrorized the Nevada goldfields between Aurora and Carson City, using scare tactics known as “criminal vigilantism,” lynching anyone who resisted. 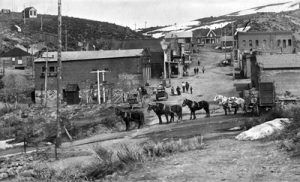 They operated without interference until the gang murdered a man named William R. Johnson on February 1, 1864, who killed one of their associates named Jim Sears when attempting to steal a horse the previous year. Slitting Johnson’s throat and setting him on fire, they left the gruesome site for all to see. When one law-abiding citizen threatened to tell the local authorities the identities of the killers, the ruffians took quick action, cut the throat of the would-be informer, and then threw the body of the unfortunate man into the muddy street to rot. Fed up, the horror-stricken citizens soon formed a vigilante group and attacked McDowell’s saloon on February 5, 1864. Dragging McDowell, Daly, Buckley, and Masterson from the saloon, they locked them up while quickly constructing gallows. A short time later, all four men were hanged outside Armory Hall in Aurora.