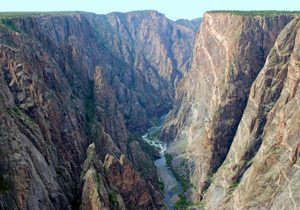 Black Canyon of the Gunnison, Colorado by the National Park Service.

Sheer black walls plummet up to 2,700 feet along the 53-mile stretch of Black Canyon’s narrow gorge. The spectacular landscape, formed over millions of years by the raging river below, combines its narrow opening, sheer walls, and startling depths like no other canyon in North America.

Located in west-central Colorado, one of America’s newest National Parks was long known to the Tabaquache Ute Indian bands hundreds of years before explorers came upon the obscure and impressive geographic feature.

The Spanish were the first Europeans to roam Colorado’s vast mountains and valleys in 1765 when Juan Rivera’s band of explorers was looking for a passage to the California coast. Passing by the canyon, they were followed by another Spanish expedition 11 years later. By the early 1800s, fur trappers were roaming through the canyon searching for game, but it would be another 50 years before the canyon would officially be explored. 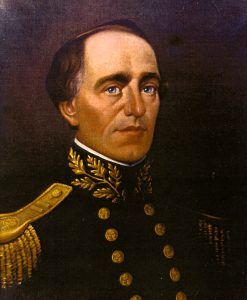 In 1853 Captain John W. Gunnison led an expedition, searching for a possible transcontinental railroad route. Daunted by the demanding terrain, Gunnison proclaimed the rugged country as totally unsuitable for a railroad and moved on into Utah. A band of Paiute killed him and all but four of the eleven members in his group on October 26, 1853.

Later explorers agreed with Gunnison about the rugged terrain of the area and had no hopes of building a railroad, that was until rich mineral deposits were discovered in Colorado’s western slopes. Once again, surveyors and engineers began to search for railroad paths through the daunting canyon. By the early 1880s, the Denver and Rio Grande Railroad was on its way west across Colorado. Before long, the company began the challenge of blasting and carving a narrow-gauge railroad from the hard rock walls of the Black Canyon of the Gunnison. A feat previously considered impossible, in August of 1882, the first Denver & Rio Grande train rolled out of the canyon and into the construction camp at the end of the tracks on Cimarron Creek. 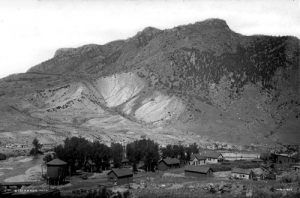 The construction camp, called Cimarron that began as nothing more than tents, and a single log cabin grew into a railroad town by the end of the year, complete with a roundhouse, station facilities, several businesses, the ever-present saloons, and more than 300 people.

When author Rudyard Kipling rode the train through the canyon in 1889, he described it:

“We entered a gorge, remote from the sun, where the rocks were two thousand feet sheer, and where a rock splintered river roared and howled ten feet below a track which seemed to have been built on the simple principle of dropping miscellaneous dirt into the river and pinning a few rails a-top. There was a glory and a wonder and a mystery about the mad ride, which I felt keenly… until I had to offer prayers for the safety of the train.” 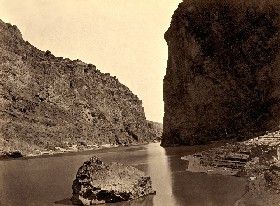 The engineers that took trains through the Black Canyon for the next 67 years were highly fearful of the route – especially during winter when avalanches and rockfalls were common, and an engineer and his crew never knew if or when their train would be the next to be swept into the icy waters of the Gunnison River. Despite the dangers and constant repair work, the Denver and Rio Grande made its Black Canyon route the cornerstone of its “Scenic Line of the World” passenger promotions and featured the Curecanti Needle on its emblem.

Though the railroad’s primary purpose was to provide shipping of the area mine ore, it was also running scenic excursions by the turn of the century. A subsidiary of the D&RG, the “Rio Grande Hotel Company,” established the “Black Canyon Hotel and Eating House,” which quickly became known for its excellent hospitality. After mining decreased in the area, the town’s population began to dwindle. Still, area cattlemen gathered at Cimarron to ship their cattle and sheep to market via the Denver and Rio Grande Railroad. However, this would change as trucks began to haul the cattle, and Cimarron’s rail yards and corrals sat empty. The last train to run from Gunnison to Cimarron along the tracks through Black Canyon was a scenic excursion in 1949. 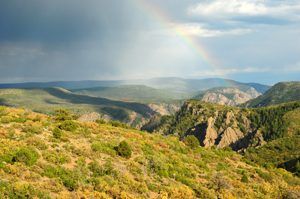 South Rim of the Black Canyon of the Gunnison, Colorado by the National Park Service.

Shortly after the last train made its scenic journey, the rails, ties, and corrals were removed. Since then, the depot, roundhouse, hotel, saloons, ice plant, and individual homes have also disappeared from the old Cimarron townsite. Today, the National Park Service maintains a visitor center, campground, and picnic area where the original town once stood.  There is also an exhibit of authentic railroad cars that interprets those bygone railroad days.  A short drive north of Cimarron is the remains of the last standing D & RG Narrow Gauge Trestle crossing the Cimarron River. This relic to Cimarron’s past is listed on the National Register of Historic Places and sports the genuine Engine 278, coal tender, a boxcar, and caboose used on those many trips through the Black Canyon. Cimarron is located just south of the Black Canyon of the Gunnison National Park and just west of the Curecanti National Recreation Area.

Within the 14 miles that lie within the park, visitors will see dramatic views of the craggy canyon walls, glimpses of the swift river running more than 2,000 feet below, as well as a plethora of wildlife, including elk, bear, deer, wild turkey, bighorn sheep and hundreds of varieties of birds.  The park also offers hiking and biking trails, cross country skiing, fishing, camping, and horseback riding.

The park’s main attraction is the scenic drive along the south rim, which is located about 15 miles east of Montrose, Colorado, via U.S. Hwy 50 and CO Hwy 347.  The north rim, which is closed in the winter, is about 11 miles south of Crawford, Colorado, via CO Hwy 92 and North Rim Road. The river itself can be accessed by a steep, unmaintained trail that takes about 4 hours to hike down and 6 to hike back. 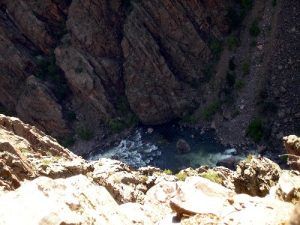 Looking down the canyon at the river below by Kathy Weiser-Alexander.

The Black Canyon of the Gunnison is approximately 60 miles southeast of Grand Junction, Colorado.