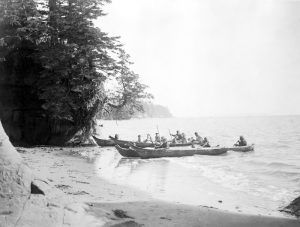 Chehalis is a collective name for several Salishan tribes who lived on the Chehalis River and its affluents and on Grays Harbor in Washington. They call themselves “People of the Sands.” There were once five principal villages on the river, seven on the north side of the bay and eight on the south side. There were also a few villages on the north end of Shoalwater Bay. Many historians divide them into the Upper Chehalis or Kwaiailk, dwelling above the Satsop River, and the Lower Chehalis from that point down. The Satsop speak a dialect distinct from the others. In 1806 Lewis and Clark estimated their population at 700.

These two groups thrived until settlers forced them to give up their ancestral lands. Rejecting the unacceptable terms of the treaties offered by the U.S. Government, the Chehalis were regarded as a “non-treaty” tribe. This meant financial aid from the government would be limited and unpredictable.

The tribe finally settled on their current reservation along the Chehalis River in 1860. The reservation encompasses seven square miles of southeastern Grays Harbor and southwestern Thurston Counties in Washington. The Confederated Tribes of the Chehalis Reservation is a federally recognized tribe that includes the Upper and Lower Chehalis, Klallam, Muckleshoot, Nisqually, and Quinault peoples. 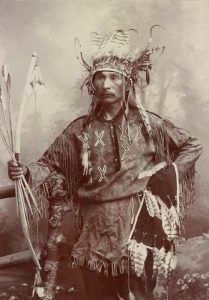 Estimated at about 850 people today, the major communities within the reservation are Chehalis Village and part of the city of Oakville. The tribe operates several thriving enterprises, including the Lucky Eagle Casino and Eagles Landing Hotel. The tribe’s headquarters are located in Oakville.

Salish People of the Pacific Northwest