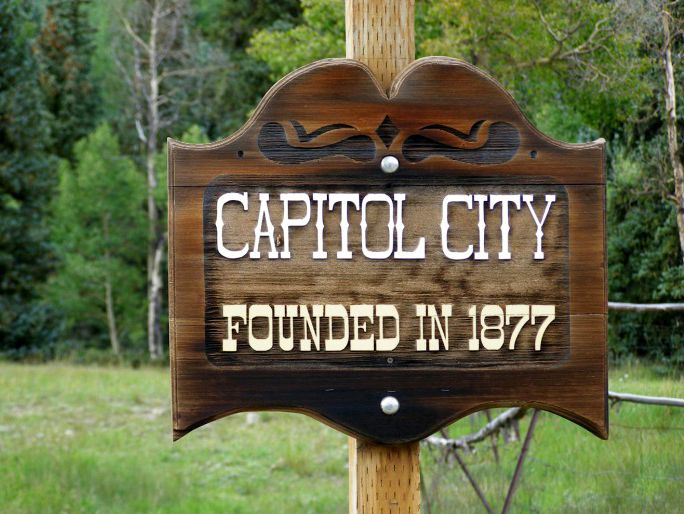 A townsite here was first envisioned in 1875 by George B. Greene of Denver, who intended to name the settlement Silver Glen. Greene started constructing a smelting operation a short distance above the town but never finished the project due to complications with the local ore and financial difficulties.

After being known alternately as Silver Glen and Galena City, the town was developed by George S. Lee in 1877. When a post office was established in May 1877, Lee suggested the name Capitol City due to the town’s proximity to Capitol Mountain, the dome of which resembles a state capitol dome. However, according to local lore, Lee envisioned Capitol City ultimately becoming the capital of Colorado and that he would become the governor. It was toward that end which he developed industries in the area.

Originally from Illinois, George S. Lee attended college in the east before making his way through the west, and to Colorado, where he worked as a mine superintendent at Central City in the 1860s. In 1877, he opened an office in Lake City with ambitious plans for the newly formed Galena Mining District.

A 200-acre townsite was developed in 1878 and lots were sold. The town served as a supply center for several neighboring silver mines, including the Capitol City, Czar, Silver Chord, Yellow Medicine, Red Rover, Vermont, and Excelsior. 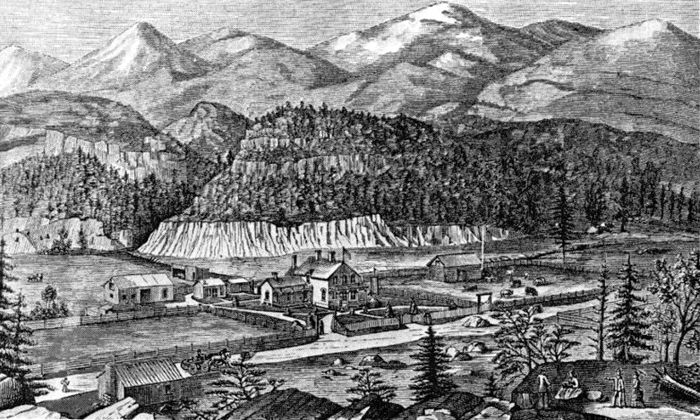 Lee soon began to build a grand two-story brick home in Capitol City. Workmen were brought in from various parts of the state and bricks, which cost $1 apiece, were hauled from Pueblo, Colorado. Completed in 1879, the house included a spacious veranda, formal parlor with a bay window where tropical plants were grown, an attached library wing, a small ballroom, a small theater with an orchestra pit, and several fine guest bedrooms on the second floor. The exterior featured landscaped gardens and the outbuildings were also built of brick. These included stables, a carriage house, and a gabled brick outhouse, the first and only one of its kind in the region. George Lee was an early advocate of the telephone and had a system connected between his house, Lake City, and neighboring communities by 1881. His home was locally known as the Lee Mansion, but Lee called it The Governor’s Mansion.

The Lees entertained lavishly in the house, which they opened to the public as the Mountain House Hotel. Their guests included Colorado Governor F.W. Pitkin in 1879 and travel writer Frank Fossett who in 1880 wrote, “And right here among these rugged mountains of faraway San Juan, where one would least expect to find it, is the most elegantly furnished house in Southern Colorado. The handsome brick residence of George S. Lee and lady [Mary Jane Lee], distinguished for their hospitality, is a landmark in this locality.”

Lee’s first industrial enterprise at Capitol City was the Lee Smelter, which was built on the lower edge of Capitol City in 1878. He later developed the Henson Creek Reduction works, located at the upper end of Capitol City, which encompassed the incomplete Greene Smelter. Unfortunately, both of these operations only ran sporadically due to a lack of quality ores and low water power during much of the year. 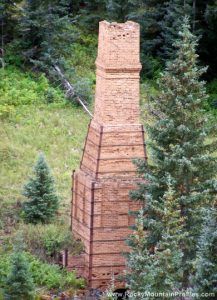 Lee also built Rose’s Lime Kiln to produce an ash-free lime that was used as a cement additive. The kiln was named after his daughter, Rose Lee. He also operated several sawmills and lumber yards which provided timber, lath and shingles for building projects in Capitol City and Lake City, as well as a brick kiln at Capitol City which in 1880 produced 240,000 bricks. Lee also envisioned an upper Henson Creek marble quarry, but this dream was never accomplished. His business interests in the Capitol City area in the late 1870s and early 1880s employed more than 115 men, making him one of the county’s largest employers.

In the meantime, the town of Capitol City was incorporated in 1879 and was growing. At its peak, it boasted two stores, several hotels and restaurants, saloons, a post office, approximately 100 cabins, two smelters, a sawmill, and a schoolhouse. A stagecoach ran by the town with fare to Lake City at $1.50 and to Animas Forks for $1.75. Mail service operated daily from Lake City April through September, but only once a week from October through March. The population peaked at 400.

George Lee’s dreams were dashed in 1882, then the local economy took a downturn. Financially over-extended, the Lee Smelter at the lower end of Capitol City was sold at sheriff’s sale in March 1882, and in August of the same year, it was quietly announced that George and Mary Jane Lee had sold all their Hinsdale County holdings and would live in Denver while superintending a coal mine near Morrison. Lee later continued to move around the west searching for placer diggings and developing silver mines. He was also an inventor and moved back east where he secured a number of patents. He remained active until his death in 1905, but despite his dreams and ambitions, left a meager estate valued at just $98.90.

In the meantime, the town of Capitol City continued to hang on, but its population declined and by 1885, it was home to only about 100 people. During the 1880s, the town was also plagued with litigation, prompting George A. Crofutt, author of the 1885 Grip-Sack Guide to say:

“Work has demonstrated there are many rich mines and mining prospects near the camp but the owners are sitting and fighting and the smelting works are idle while waiting for something to turn up. The more valuable the mines and property, the more certain they are to be tied up and ruined by quarreling and litigation. Prospects for wealth in any mining camp were seldom richer than in Capitol City and it is to be hoped that the clouds will clear away and great prosperity result.”

Lee’s Capitol City ventures never again operated profitably and both smelters were dismantled for scrap within a short time. 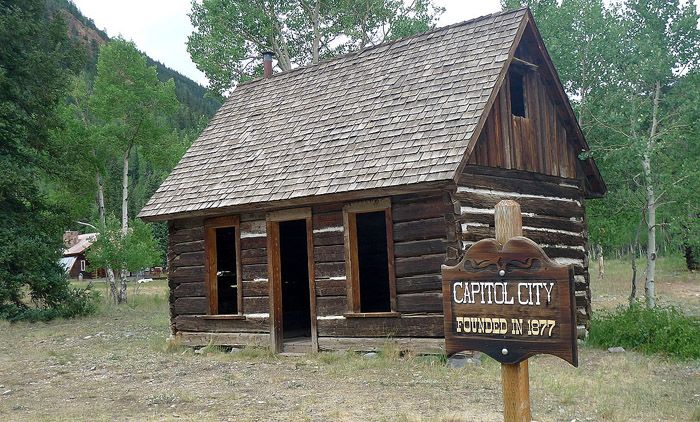 After the silver demonetization in 1893, mineral output in the Capitol City region steadily declined, further hurting the town. However, gold was found in the area around the turn of the century temporarily reviving the town. However, it would not last long. The post office was discontinued in October 1920. It was the second longest-lived post office in Hinsdale County. It was also the only town in Hinsdale County, other than Lake City to be incorporated.

By 1930 Capitol City had become a ghost town.

Over the years, the celebrated Lee Mansion gradually fell into ruin and was early on, stripped of its once elegant furnishings. Nothing remains of the structure today. Of all George Lee’s investments in Hinsdale County, only the Rose Lime Kiln remains.

Today, the old mining camp features only the old post office and Lee’s Smelter Stack. The rest of the townsite has been reclaimed by aspen, mountain willows, and evergreen trees. There are several private homes and vacant parcels of private property in the Capitol City area, upon which visitors should not trespass.

Capitol City is located at an elevation of 9,480′ at the forks of Henson Creek nine miles west of Lake City. 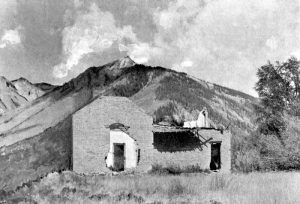 The ruins of the Lee Mansion in Capitol City, Colorado in 1960.