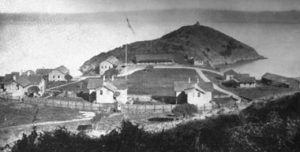 Yerba Buena is a 116-acre island, situated in San Francisco Bay between San Francisco and Oakland, California. Early on, the island was called by several names, including Sea Bird Island, Wood Island, and Goat Island.

Use of the island was first intended for defense of the bay in 1861 when plans were made for the installation of artillery batteries and the garrisoning of troops. However, construction was delayed until after the Civil War. Camp Yerba Buena was established in 1868, serving as a regular Army camp, which included the construction of a fog signal and octagonal lighthouse in 1875, which still stands today. In 1880, the island and its improvements were transferred to the Navy Department. 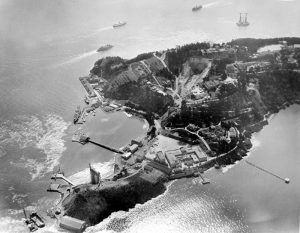 Just before the turn of the 20th century, the first U.S. Naval Training Station on the Pacific Coast was established on the northeast side of the island and in 1900, Quarters One, also known as the Nimitz House, was built as the Commandant’s residence. The training station closed in 1916.

For the 1939 World’s Fair, the bay was dredged and fills added to the shoals on the north shores, creating “Treasure Island” as a fair site. The island then became a naval headquarters and an anchorage for the Oakland Bay Bridge. In 1996, the naval base and the Presidio de San Francisco were decommissioned, and opened to public control, with certain conditions. The island today features numerous buildings that once served the U.S. military, as well as buildings from the 1939 World’s Fair. Today, the island continues to serve as a Coast Guard Station. 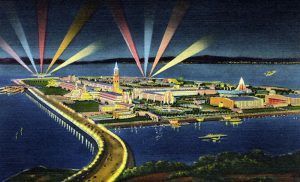 Treasure Island during the Worlds Fair of 1939.

The island can be reached from either side of San Francisco Bay by taking the Yerba Buena exit off the Oakland Bay Bridge.