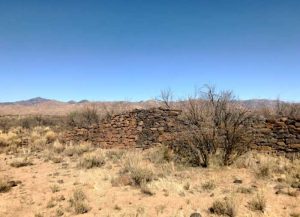 Camp Date Creek, Arizona, was first established as Camp McPherson in January 1867. The camp was a temporary post, and its purpose was to guard the road between Prescott and La Paz, Arizona.

Unlike many Arizona forts, Camp McPherson was situated in an area of beauty, with meadows and tall grasses along a creek called Date Creek, because of the abundance of yucca, or wild dates, in the area. The post was named for Brigadier General James B. McPherson, who was killed in the Battle of Atlanta on July 22, 1864. Its initial service was short-lived as just a few months later, it was moved north some 25 miles and renamed Camp Skull Valley in March. However, it was returned to its original location in May and renamed Camp Date Creek. By 1868, two companies of the 14th infantry were stationed at the post, but legend has it, they initially spent more time fixing buildings and prospecting in the area than they did fighting Indians. However, that changed when the first recorded skirmish took place in September 1869 and afterward was followed by several Indian attacks. The post was moved two more times along Date Creek during its existence. In 1871, a temporary Indian Reservation was located near the post.

In 1874, the Secretary of War restored the lands to the public domain, saying that the post was of no use for military purposes. Settlers then used the buildings for the next several years. Today a few original building walls still stand, and an old cemetery is located at the site. However, the cemetery graves are civilian as the soldiers’ remains were moved to the Presidio in San Francisco, California.

The site is located 60 miles southwest of Prescott, Arizona, in Yavapai County, north of US Highway 89 in the Date Creek vicinity.