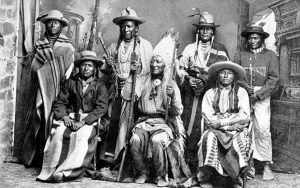 A sub-post of Fort Bridger, Camp Augur was established by Lieutenant Patrick Henry Breslin and troops from the 4th U.S. Infantry on June 28, 1869, in present-day Lander, Wyoming. It was named after Brigadier General Christopher C. Augur, commander of the Army’s Department of the Platte. Its purpose was to protect the Shoshone reservation which was created in 1868. It was also tasked with protecting the settlers in the Sweetwater Mining District. It was comprised of several log cabins with sod roofs surrounded by a 175 foot by 125 foot enclosure and a ditch.

Less than a year later, it was reorganized as an independent post on March 28, 1870, and renamed Camp Brown after Captain Frederick H. Brown, who was killed in the Fetterman Massacre on December 21, 1866.

A granite marker is located at the original site in Lander, Wyoming at 427 Main Street.