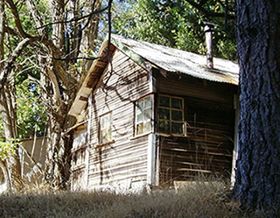 Forgotten now are the thousand or more places where much of El Dorado County’s history was written. In mining camps and towns such as… Hell Roaring Diggings, Loafer’s Hollow, Whiskey Flat, George’s Town, and Poverty Flat. The names of other camps frequently told you much about who was mining there… Chile Bar (Chileans), Kanakatown (Hawaiians), Frenchtown, Alabama Flat, Texas Bar, Cooley Mine (Chinese), Indian Diggings, Mormon Gulch, even Puritan Camp. Forever consigned to the records of time each of these camps had it’s own unique and often colorful history. One such place is the ghost town of Volcanoville where tales of its past include mining and buried treasures.

It was here during the days of the California Gold Rush when the Volcanoville boasted a lively population of thousands, including a large Chinatown. In the cemetery, two headstones remain which speak of the town’s past. The tombstones tell of two 49ers interred here — both youths had been murdered for their miner’s poke by Gold Rush highwaymen.

It was during the mid-1870s when Volcanoville saw a serious decline in mining as many quartz mines played out. With gold more difficult to find, anger and hate for all non-Anglos in the diggings became a hot subject. Most Chinese were now working in the larger cities in Northern California, for those who remained in the Mother Lode they suffered the most since they represented competition to White miners. Such was the case in 1874 when Chinese miners discovered a 10 oz. pure gold nugget on their claim at the Cooley (Chinese) Mine in Volcanoville.

One evening a group of miners gathered at a local saloon where their conversation turned towards the dreaded Chinese. With enough liquor, words quickly turned to action leading to the massacre of at least 15 Chinese that night. The Chinese miners were rounded up by the drunks and herded into a cabin. With the Chinese locked inside, the cabin was set afire. Those who died in the inferno were only spared a bullet; those who ran from the flames and thick smoke were quickly gunned downed in flight. None survived.

While many Chinese were mining along the Middle Fork of the American River one group of 12 from Volcanoville was buried alive in a cave-in during the 1890s. By the time aid reached the men they had died from suffocation.

Another story from Volcanoville tells of a wealthy Chinese store owner who ran a thriving general store. He sold out to another Chinese man and himself returned to China. For years he remained in his homeland before returning to Volcanoville.

He claimed he returned to retrieve a cache of gold he’d hidden years earlier. A major fire had destroyed much of the town in 1879 which left the older former store owner with no landmarks to guide him to his treasure. He returned several times over the next several years looking for his lost cache but never found it. 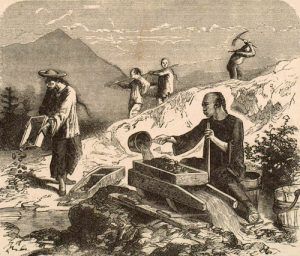 For years treasure hunters have sought to answer the question of the lost Chinese caches buried in and around Volcanoville.

Volcanoville was founded as a small trading post in 1851 but grew into a large prospering Gold Rush town by 1855. Other industries in the area included a steam-driven sawmill and tannery at Mt. Gregory. Volcanoville became a voting precinct in 1854 and established its own Post Office in 1858.

Mining became prosperous here again during the 1880s and remained so through the 1890s supporting a 20-stamp mill. At that time the largest working quartz mine was the Josephine. As most of the town’s residents were employees of the Josephine Mine, in 1895 the Post Office changed the name of the town from Volcanoville to Josephine. The Josephine Post Office operated until discontinued in 1917. The town saw two devastating fires, the first in 1879 then again in 1907. All of the remaining original buildings to survive the 1879 fire were destroyed in the 1907 fire. A small community re-established itself here but the town never recovered.

Somewhere I once read that “25% of all the precious metals and gems ever recovered have become lost”. It is true during the era when global transportation was provided by the great sailing ships of the day much treasure went down the result of accident, piracy, or violent storms. The next cause has been laid to natural disasters. Finally, the remainder is credited to the individual who acquires wealth and buries it for safekeeping. For whatever reason, the owner of the cache is separated from his wealth and is never able to recover it. It is said that a dozen or more of these buried Chinese caches is connected to the history at Volcanoville.

About the Author: Anthony M. Belli is a native of California currently living in the Sierras of El Dorado County. Having a background in law enforcement, he was the youngest police chief in Oregon history. Now, Belli is a recognized historian, writer, and lecturer on the California Gold Rush, and serves on the research staff for the El Dorado County Museum. He has been featured in a number of television programs, writes for Lost Treasure Magazine, wrote the book Mysteries of Tahoe – Lost Treasure, and is currently working on a second book.