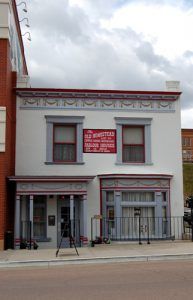 The Old Homestead House Museum in Cripple Creek, Colorado, is a house with an interesting history.

This building was once the site of a popular 1890s brothel that once housed several “soiled doves” catering to the area’s many miners during the Colorado gold rush days.

The building was built and owned by Pearl DeVere, the house madam, in 1896. The finest and most expensive house in the settlement, Pearl required the men to make a financial application before they could be admitted to the house, and then, by appointment only. Pearl was said to have been a beautiful woman and popular, so when she died of a morphine overdose just a year after building her fabulous house, the area men were shocked.  Her funeral was the largest that Cripple Creek had ever seen. 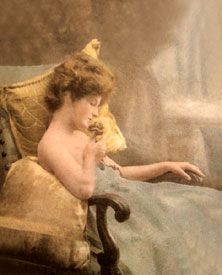 One of Pearl’s Girls

Interestingly, the museum offers admission for half-price to children ages 10-13 and free for children under ten. Children?? Go figure.

Another interesting note came from our reader Lindy in Elizabeth, Colorado, who says that museum staff report hauntings in the old brothel. Once in a while, according to staff, visitors will get a funny look on their faces and suddenly ask if there are ghosts at the museum. They are feeling the presence of something around them. During recent construction, several reports from workers said that the former “girls” of the house were watching them work. Others have felt someone touching them and sensed movement out of the corner of their eye. Several people have reported that three former soiled doves continue to reside at the old parlor house.