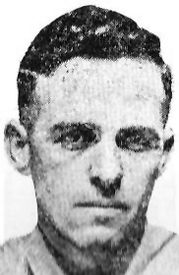 Edward Adams was a brutal criminal in Kansas during Prohibition

Edward J. “Eddie” Adams was a notorious outlaw and murderer in the Midwest during  Prohibition. In a 14 month period, he killed seven people, including three policemen, and wounded at least a dozen others.

Eddie Adams was born on a farm in Hutchinson, Kansas in 1887 as W.J. Wallace. When he was very young, his father died, and his mother remarried. Eddie didn’t like his stepfather and soon began to get in trouble. However, he learned to be a barber and moved to Wichita, Kansas in the early 1900s. There, he met a bootlegger named John Callahan and quickly became involved in the business as well as petty robberies and car theft. She married somewhere along the line, but his wife soon left him for his criminal activities and many infidelities. He then formed a gang and began committing bank and train robberies throughout Kansas, Missouri, and Iowa.

In 1920, he was in Kansas City, Missouri, where he hooked up with outlaw brothers Ray and Walter Majors. On September 5, 1920, they attempted to rob an illegal gambling den, and a shootout erupted between the would-be robbers and the tough employees, resulting in the death of a gambler and gunman named Frank Gardner. 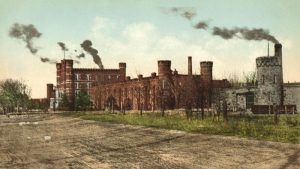 The three were soon apprehended, and Adams was sentenced to life in prison in February 1921. His partners, however, were only sentenced to five years. But, Adams escaped while being transported to the Missouri State Prison in Jefferson City, Missouri, by jumping off the train. Within just a few days, he and a man named Julius Finney robbed a bank and a general store in Cullison, Kansas, on February 11, 1921. Pursued by a posse, he was arrested six days later. Convicted of bank robbery, he was sentenced to serve 10-30 years at the Kansas State Prison in Lansing, in addition to his life sentence in Missouri for murder.

Quite an escape artist, Adams made another getaway from Lansing on August 13. He sabotaged the prison power plant and scaled a prison wall and inmates Frank Foster, George Weisberger, and D.C. Brown. Waiting for them in a getaway car was outlaw Billy Fintelman. D.C. Brown was captured just a few days later, but the others continued a life of crime. The very next month, the newly formed Adams Gang robbed about $10,000 from banks in Rose Hill and Haysville, Kansas. During the Haysville robbery, Adams pistol-whipped 82-year-old man named James Krievell, who later died of a fractured skull.

On October 8, police attempted to trap the gang near Anoly, Kansas, but they were again able to escape after a gun battle that left Deputy Benjamin Fisher wounded. Eleven days later, they stole some $500 in silver from a bank near Osceola, Iowa. The gang was pursued by law officers who caught up with them near Murray, Iowa. When Sheriff Ed West and other law enforcement officers confronted the gangsters, another shootout occurred, and several policemen were wounded. When a local farmer named Jones intervened, he was killed. 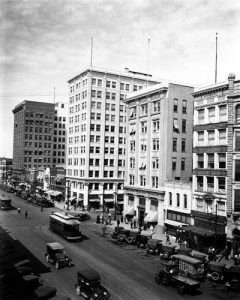 The ruthless robbers and killers then returned to Kansas, where they robbed eleven stores in Muscotah, Kansas before making their way to Wichita. Along the way, they abducted two motorcycle officers outside of Wichita and set their motorcycles on fire. On November 5, 1921, Adams shot and killed Wichita Patrolman A.L. Young in cold blood while Young was on duty. It is believed that Adams ambushed Young because Young had the affection of a girl Adams was interested in and rejected by. While walking his beat, near the corner of Lewellen and Eleventh Street, nine shots were heard by witnesses, and Young was dead, his revolver empty. Adams was nowhere to be found.

The gang then committed their most successful robbery, making off with some  $35,000 from a Santa Fe express train near Ottawa, Kansas. The gang then returned to Wichita, where their luck would soon run out.

On the evening of November 20, Eddie Adams, along with Frank Foster, a local madam named Nellie Miles, a bootlegger named George J. McFarland, and two prostitutes were joyriding around Wichita. Behind them followed another car carrying Billy Fintelman and his wife, George Weisberger, a man named P.D. Orcutt, and two unnamed ladies. Racing along at high speeds, two motorcycle cops soon pulled over the vehicle carrying Adams.

As the lawmen approached, a shot was fired from the vehicle killing patrolman Robert Fitzpatrick and the outlaws sped away. They then dropped off the “ladies” and fled south into Cowley County. Later that night when they ran out of gas, Adams attempted to steal a vehicle from farmer George Oldham who resisted. Adams shot and killed the farmer before he and Frank Foster took off with the car. George J. McFarland took off on foot. Adams and Foster soon returned to Wichita, and the next day Adams, along with Billy Fintelman, went to George McFarland’s house to look for him. However, instead of finding their bootlegger buddy, they found two police officers waiting. Eddie Adams immediately shot Officer Ray Casner while the other officer hid. Casner survived, and Adams and Fintelman made their escape.

Two days later, on November 23, 1921, Adams attempted to rent a car in Wichita but was recognized by the owner. The police were alerted, and soon Detective Charles D. Hoffman and two other officers entered the business’s back door. Adams drew his gun and Detective Hoffman lunged forward, seizing Adams, but the killer worked his gun hand free and fired, killing Hoffman instantly. He then fired on one of the other officers, Charles Bowman, hitting him. The third officer, D.C. Stuckey, hidden behind a pillar, took careful aim and finally killed Adams.

Eddie Adams’ body was publicly displayed in the City Undertaking Parlor, celebrating the end of the outlaw’s reign of terror. More than 9,000 people viewed his dead body.

In the end, 18 people were arrested as Adams’ accomplices. Four were sent to the Kansas State  Penitentiary, Frank Foster, for life.