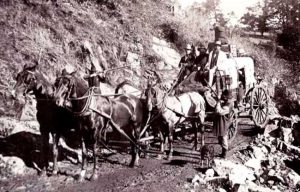 William Whitney Brazelton, also known as “Brazen Bill,” was a stagecoach robber who operated in Arizona and New Mexico in the days of the Wild West.

Brazelton claimed to have been born in Missouri but lived in San Francisco, California when he was a child. At some point, he was orphaned and left to fend for himself on the streets of the Barbary Coast. It is said that he killed a man when he was just 15 years old. Nothing else is known about his early life.

In 1876, he arrived in Prescott, Arizona, claiming that he would stage a show where he would eat a wagon wheel, amongst other spectacular feats. After collecting money for the show, he said he would gather the rest of the troupe, and then he disappeared. He was described as a large man who stood over six feet tall, weighed over 200 pounds, and was a dexterous deadly shot.

On April 28, 1877, a stagecoach between Socorro and Las Lunas, New Mexico, was robbed of three gold bars and a box of silver. This is thought to have been his first stage robbery. His robbery mode was to wear a mask over his face and carry a pistol and rifle in one hand while ordering the driver and passengers to hand over any valuables.

That year, he had made his way to Tucson, Arizona, where he worked as a hay and grain hauler.

September 27, 1877, the California and Arizona Stage was held up 12 miles north of Wickenburg, Arizona. Wearing a mask of black gauze and wearing old laborer’s clothes, Brazelton forced the driver to get down and secure the horses. During the robbery, the mail bags and Express box were opened. He then took $600 from a registered package, a package of cold coins and gold dust valued at $1,300 and another $470 in cash, and other items totaling $250.

The stage from Silver City, New Mexico, was held up at Cook’s Canyon on May 28, 1878. This robbery was not as profitable as Brazelton only made off with $26 in registered mail, an old silver watch, and $13.00 taken from the driver and other passengers.

July 31, 1878, Brazelton robbed the stage at Point Mountain, Arizona, 18 miles from Tucson. The bandit found the express box empty, and two mailbags contained nothing of value. He then took $37.00 and a pair of earrings from the passengers. By this time, the robber was no longer wearing a black gauze mask, changing it to a white mask with cut-out eyeholes and a red-colored mouth. 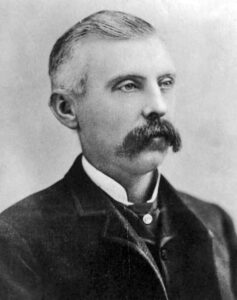 The bandit again robbed the stage robbed at Point Mountain on August 15, 1878, making off with $234 from the passengers.

These were not all of the robberies he allegedly committed, as authorities estimated that he robbed nine stagecoaches in Arizona and New Mexico.

On August 19, 1878, Pima County Sheriff Charles A. Shibell led a citizen posse tracking William Brazelton. The horse used by Brazen Bill threw a shoe, leaving a distinct print that allowed pursuers to track it back to a horse corral owned by David Nemitz, a young rancher. Brazen Bill wasn’t there, but Nemitz was arrested as an accessory. Nemitz said he felt pressured to act as an accessory to the robberies and agreed to tell all if he could be protected from the dangerous outlaw. He also said that Brazelton planned to rob another stage and warned the Sheriff that Brazelton “would not be taken alive unless by artful strategy.”

The posse tracked the outlaw to a mesquite bosque along the Santa Cruz River about three miles south of Tucson on August 22, 1878. There,  Brazelton was shot and killed. 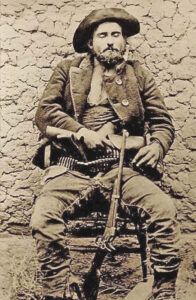 His body was taken to Tucson, which was photographed twice, first wearing the mask and then unmasked. Sitting upright in a chair in front of the courthouse, the corpse was displayed until he was buried the next day.

Governor John Hoyt was sent a telegram from W. J. Osborn of Tucson stating: “Sheriff Shibell and posse killed William Brazzleton last night in an attempt to arrest him. Brazzleton it seems is the desperate character who single-handed has been taken in the United States Mail in different places in the territory.”