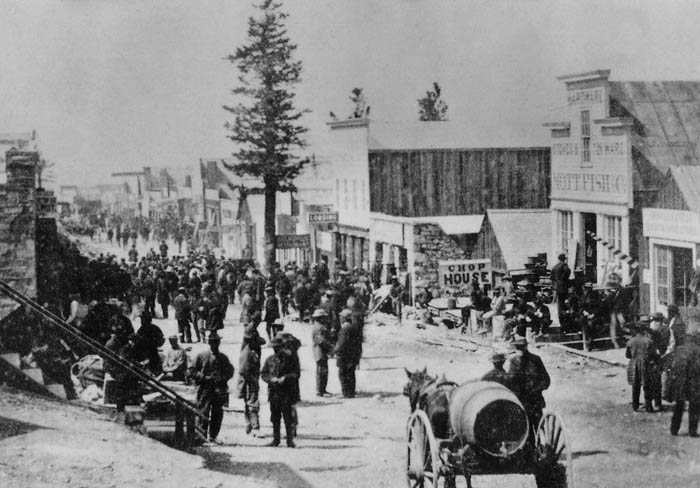 L.P. Tenney was the Mining Recorder on Treasure Hill, Nevada in the early days of the White Pine excitement during 1868 and ’69. Tens of thousands knew him, for Treasure Hill was plastered three feet deep with mining locations on top of each other, and Tenney recorded everything offered, leaving it to the courts and lawyers to settle the title of ownership afterward. The extent of his patronage was so great that he waxed rich, and after the excitement subsided, he gathered up his golden gains and retired to San Francisco.

There, in the midst of a life of leisure, he would occasionally grow communicative and recount his early struggles in California, and one of his cherished reminiscences was to recount his first attempt at placer mining. In 1852, he landed in San Francisco and went at once to the mines, stopping at Grass Valley. Early the next morning, he made his way up the creek and accosted the first miner by asking him how much he would charge to teach him how to mine. The miner put him to work transporting pay dirt in a bucket from excavation to the rocker on the banks of the creek, and after a three-days’ apprenticeship, served without pay, Tenney located a claim for himself, and like all greenhorns, chose a spot that no one else would touch, and all looked on him as a d—–d fool for digging there. 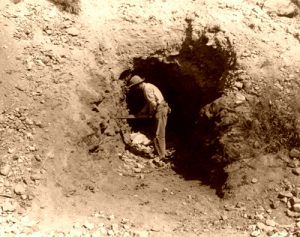 Man working at the entrance of gold mine in Nevada, Waldon Fawcett, 1907

But Tenney was in earnest and was going for pay gravel so eagerly that he soon had a shaft down 15 feet and out of reach of further depth unless he got assistance. He formed a partnership with two strangers who aided in sinking it to a depth of 30 feet, and then said he could go on and if he struck anything they would divide with him, while they left for other fields. Tenney was discouraged, but learning of two strangers, one of whom was called White-Headed Bill, that wanted an opportunity to engage in mining, he made a proposition and with their assistance resumed work, and in running adrift from the bottom of the shaft they struck it rich and began taking out from $200.00 to $300.00 a day.

Two weeks after his first partners departed, they returned, and while Tenney was at work in the drift, and White Headed Bill and his comrade were engaged in hoisting, they came to the shaft, and made a demand for their claim. Tenney heard an angry discussion going on, followed by blows and knock-downs, and as hurriedly as he could, he climbed the rope to the surface and found that the neighboring miners had rushed in and separated the two principal combatants at a time when White-Headed Bill was giving one of the returned locators a severe thumping.

The miners suggested an immediate trial of the rights of property, and forming a circle and choosing a judge and jury, proceeded at once with the trial, one from each side acting as an attorney, and White Headed Bill acting for Tenney’s side. It was soon demonstrated that the original locators had abandoned the claim and been absent over 10 days, which by the district laws then in force, gave the claim to Tenney and his last partners. They resumed their work, and at the commencement of the rainy season, they divided $15,000.00 as the result of their labors, and sold the claim for $1,500.00, supposing it exhausted. It afterward proved to be the richest in the district, gained wide renown, known as the celebrated Coyote lead. The fighting attorney and stalwart miner known as White-Headed Bill later became the champion of free coinage and known as the Honorable William M. Stewart. 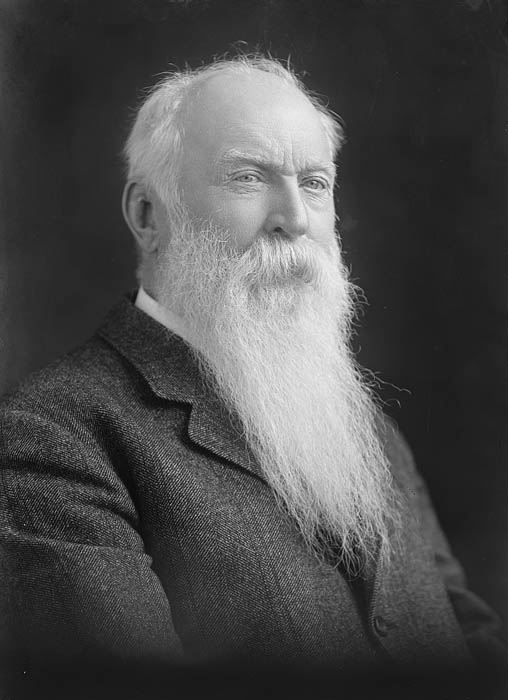 By William Daugherty in 1891. Compiled and edited by Kathy Weiser/Legends of America, updated January 2020.