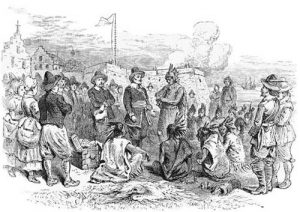 The Wappinger people were originally located on the east side of the Hudson River between the Bronx and Rhinebeck extending east to the crest of the Taconic Mountains on the border between New York and Connecticut.

Of the Eastern Algonquian Family, their nearest allies were the Mohican to the north, the Montaukett to the southeast on Long Island, and the remaining New England tribes to the east. Like the Delaware, the Wappinger were highly decentralized as a people. They formed numerous loosely associated bands that had established geographic territories.

Except for a few small groups, most Wappinger had left the lower Hudson Valley by 1760 and settled in western Massachusetts with the Mohican at Stockbridge, the Iroquois in New York, or the Delaware in Pennsylvania. Once numbering around 8,000 in 30 villages, disease and warfare eventually wiped out most of the tribe. One possible group of Wappinger remain in northern New Jersey today — the Ramapough Mountain Indians (Ramapo Mountain People). With 2,500 members, they have state recognition but were denied federal status in 1993.