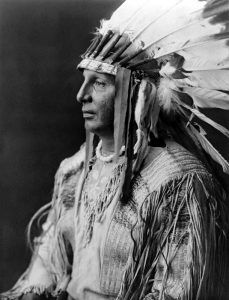 The Arikara War (1923) – Taking place in 1823, the Arikara War is noted as the first Plains Indian War between the United States and the western Native Americans. After a chief’s son was killed by a fur trader, the Arikara began to attack fur traders along the Missouri River, resulting in about a dozen deaths.

Battle of Slim Buttes (1876) – Following the disastrous battles of the Rosebud and Little Bighorn in Montana in June 1876, Generals Alfred Terry, Nelson Miles, and George Crook took up an unsuccessful summer chase of the Sioux. On the evening of September 8, 1876, near the present town of Reva, South Dakota, Captain Mills’s Third Cavalry troopers surrounded the village and attacked it the next morning. Taken by surprise, the village was destroyed and American Horse killed. 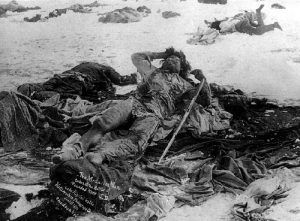 Wounded Knee Massacre Site, South Dakota (1890) – Wounded Knee, South Dakota, represents the last significant clash between American Indians and U.S. troops in North America. Following the introduction of the Ghost Dance among the Lakota Sioux and the killing of Sitting Bull, a band of Sioux fled the reservation. Once they surrendered, it turned into a tragedy when a gun discharged, leading to a virtual massacre of Spotted Elk’s band on December 29, 1890.

Drexel Mission Fight (1890) – An armed confrontation between Lakota warriors and the United States Army that took place on the Pine Ridge Indian Reservation in South Dakota on December 30, 1890, the day after the Wounded Knee Massacre. The fight occurred on White Clay Creek approximately 15 miles north of Pine Ridge where the Lakota were purported to have burned the Catholic Mission.