The Saugus Iron Works National Historic Site in Massachusetts is the site of the first integrated ironworks in North America.

Although some attempts at iron manufacture had been made in Virginia as early as 1619, it would be years later before the iron industry would begin in Saugus. In 1646, only 26 years after the first permanent settlement had been established in Massachusetts, a partnership between the Company of Undertakers for the Iron Works in New England began the construction of an ironworks, under the direction of Richard Leader. The partnership benefited from the initiative of John Winthrop, Jr., and legal encouragement given by the Massachusetts General Court in 1641. 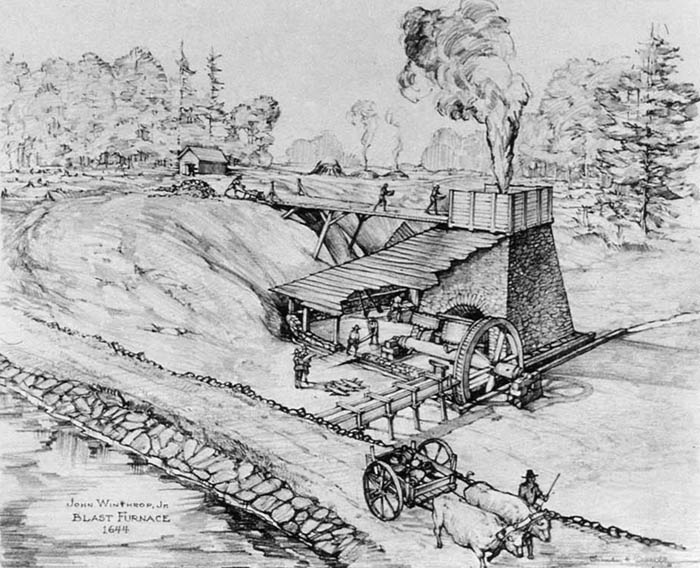 John Winthrop the Younger, a son of the governor, became one of its strongest promoters and some wealthy Puritan men became part-owners in the iron works. Other Puritan men who were farmers worked part-time for the iron works to make extra money. When it began operations, the iron works were called Hammersmith.

Many of the ironworkers were recruited from England for their special iron making knowledge. Skilled ironworkers were not Puritan, and they were not property owners, so they did not have a say in the governance of the colony. Unfortunately, the skilled ironworkers and the Puritans often disagreed on religious practices and laws, as well as having different ideas about how to behave in the community. The ironworkers often got into trouble for drinking, gambling, fighting, swearing, not attending Puritan church, and wearing fine clothes. 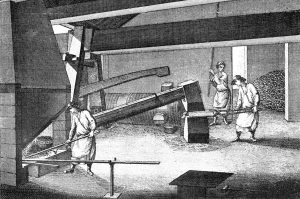 Some of the ironworkers were indentured servants, who was a  worker who agreed to work for an employer for a certain amount of time without wages or for limited wages. These indentured servants usually worked for three to seven years in exchange for their passage to New England, and the costs of food, clothing, housing, and other necessities once they arrived. Wives of the ironworkers sometimes came with their husbands as part of their indenture agreements.

Other indentured servants were former Scottish soldiers who were defeated in the English Civil War at the Battle of Dunbar in 1650. After they were captured by the English, they were sent to Massachusetts Bay Colony to work as indentured servants for seven years. Some of the Scots worked at the ironworks while others were sold to different businesses in the colony. These men worked as woodcutters, charcoal makers, or unskilled laborers for the most part. They were placed in company housing and were given what they needed to live and work. Some lived with skilled workers who taught them skills such as blacksmithing and carpentry. They required to work at the iron works to repay their debts from their voyage, food, shelter, medical care, and clothing. 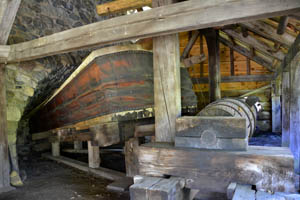 The works were more than a blast furnace producing crude pig iron and cast ware. Its forge manufactured bars of wrought iron, from which could be made the tools and hardware that were needed by colonial farms and enterprises — hoes, shovels, hinges, and other items. Its rolling and slitting mill turned out rod iron that could be shaped into nails, which were much needed in the colonies. The works consisted of a blast furnace, casting house, a forge with two fineries and a chafery, a rolling and slitting mill, and various storehouses and other buildings.

Although the Iron Works produced a respectable quantity of iron, due to the high cost of labor, financial mismanagement which may have included embezzlement, and a number of lawsuits, it seldom operated at a profit. Finally, after years of active and widely distributed production, a growing scarcity of raw materials seriously affected operations. Imported iron wares undercut Saugus iron in the market, and by 1670 the works had been abandoned and had begun falling into ruins. The iron industry did not flourish again in the colonies until the 18th century. 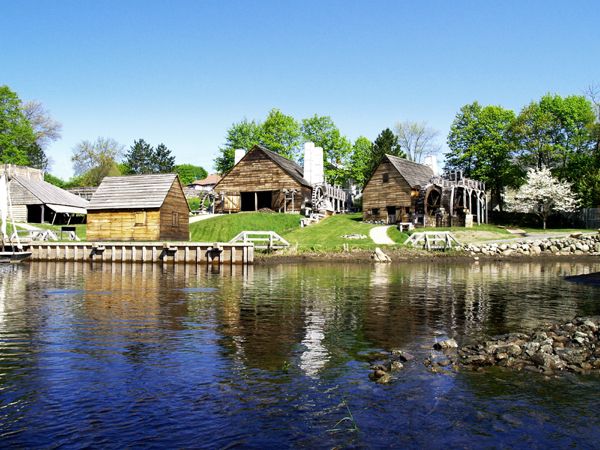 Saugus Iron Works had completely disappeared by the 1940s when a project aimed at its reconstruction was begun. Rebuilding involved six years of research and construction and funds totaling $1.5 million. The reconstruction was based on archeological evidence and historical documents, as well as partially on conjecture.

The Saugus Iron Works was opened to the public on September 18, 1954. Restored and supported by today’s American iron and steel industry, it is a full-scale model of the original 17th-century works and has a unique public interest and educational value.

In 1968, by an Act of Congress, the iron works became Saugus Iron Works National Historic Site and was officially added to the National Parks system. 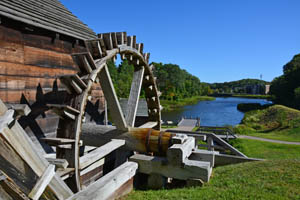 The museum is a great place to begin your exploration of Saugus Iron Works National Historic site. The museum has two rooms full of exhibits and artifacts excavated during the archaeological dig performed on-site in the 1940s-1950s. The park is open seasonally, from May through October.

It is located in Saugus, Massachusetts, about 10 miles north of Boston, on U.S. 1.

Historic Sites and Buildings of Massachusetts 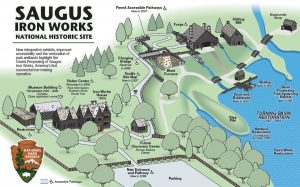