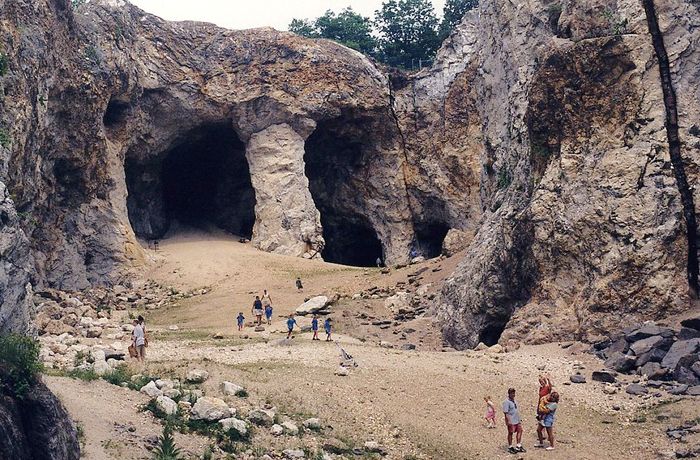 Ruggles Mine near Grafton, New Hampshire by Squelle, Wikipedia

Ruggles Mine near Grafton, New Hampshire is a mica mine that got its start in about 1805 and operated for more than 150 years before it closed and became a tourist attraction.

Located on Isinglass Mountain, minerals were discovered here in 1803 by Sam Ruggles, a Boston, Massachusetts merchant. In July 1805, he bought some property on the mountain and began to mine the mica. At that time, mica was in great demand for its use in many household products, such as lamp chimneys and stove windows. Ruggles made subsequent purchases of adjoining properties in 1806 and 1810. The mine that bears his name was the first commercial mica mine in the United States.

His first advertisement for mica, called “sheet isinglass” at the time, appeared in the Boston Semi-Weekly Advertiser on November 9, 1825. By 1831 his occupation was listed in the Boston Directory as a merchant of sheet isinglass and he had a storefront and warehouse in Boston. He was never a resident of New Hampshire, but rather, hired local workers in Grafton to operate the mine. 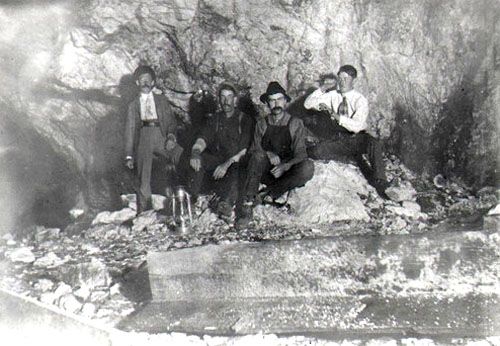 Ruggles Mine employees in 1911.

Sam Ruggles sold his mine properties to his son George Ruggles in 1834 but Sam continued to work with him until his death in 1843. By 1840 it was said that 600 to 700 pounds of mica were mined annually, valued at $1500. By 1869 production had increased tremendously, and in that year, some 26,000 pounds was mined. The mine reported shipping 3,600 pounds in January of 1877. The mine stayed in the family until 1896 when it was abandoned amid bankruptcy and litigation. Afterward, the mine changed had several times over the years.

Beginning in about 1912, mining began for feldspar, which is used in the making of high-grade ceramics and enamel surfaces for appliances. Later on, Beryl, the principal ore of the metal known as beryllium, was also mined. Beryllium alloys are used in atomic reactors and electrical components.

During the 20th century, the mine was reworked several times for the scrap mica that was left behind during earlier operations. At this time, new uses for mica included in the making of wallpaper, in paint, roofing, molded insulation, lubricants, and cosmetics. The recovered mica was then washed down a 3,200-foot flume to a mill at the bottom of the hill. 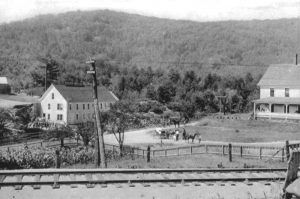 The Bon Ami Company owned and operated the Ruggles Mine between 1932 and 1959. They mined the feldspar for their non-abrasive scouring powder and glass cleaner. The Bon Ami Company extracted approximately ten thousand tons of feldspar a year during their operation.

By the early to middle part of the 20th century, mica mining began to decline, even though its value remained high. But, by this time domestic mica mining operations could no longer compete in price with the mica imported from Brazil and India.

In 1960, the mine was put up for sale, by which time it was estimated that the mine had produced about $12 million in ore. This ended an important chapter in the area history, as the mine had long provided employment and revenue to many people.

It was purchased that winter by the Wahlstrom family, who bought the mine for its well-deserved reputation for top-quality mica. However, they too, found that they couldn’t compete with foreign suppliers and turned the mine into a tourist attraction in 1963. From this time until 2016, the mine was opened to the public from mid-May to mid-October. For 40 years visitors came to experience the geologic and mining history, explore the tunnels, and were allowed to collect minerals, which also included amethyst, rose/smoky quartz, and garnet at the Ruggles Mine. 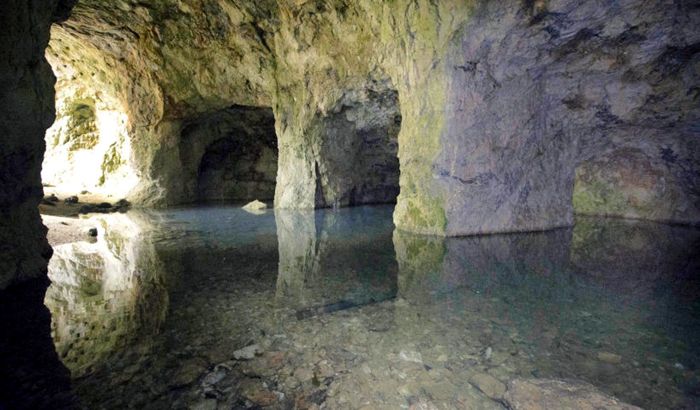 Many of the caverns of the Ruggles Mine are flooded with water today. Photo courtesy Boston.com

After 40 years, the mine closed in 2016, when owner Geraldine Searles, then 90, put it up for sale. The 235-acre, mostly forested property, which includes a 2,400-square-foot building that housed a museum and gift shop, was originally listed for sale for $2 million. It has since dropped to $900,000.

In 2018 an online petition was started by a local resident to turn the mine into a New Hampshire state park. At present, the New Hampshire State Park Advisory Council is exploring the issue.

The 200+-year-old mine, with its enormous pit with tunnels and caverns is the oldest and largest mine of its kind in the United States. Some of the underground chambers are filled with water today and unfortunately, it has been subject to trespassing and vandalism. But, it not only provides historical, geologic, and natural features, but also panoramic views of the area and incredible scenery. The property has plenty of room for a campground and would be an ideal base from which to explore other regions of the state.

Ruggles Mine is located 40 miles northwest of Concord, New Hampshire near the town of Grafton. From Grafton, visitors drive about 1.5 miles to the northwest on US-4 to Riddle Hill Road, which makes continues up Isinglass Mountain for about 1.3 miles to Underhill Road, where the mine is located. 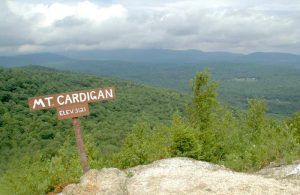 View of the Ruggles Mine Area, by Ole Holbech, courtesy Google Maps