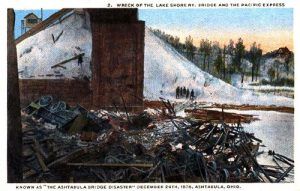 As Waterloo lingered in the memory of the conquered Corsican, so Ashtabula was burned into the brain of Bradish. Out of that awful wreck he crawled, widowed and childless. For a long time he did not realize, for his head was hurt in that frightful crash.

By the time he was fit to leave the hospital they had told him, little by little, that all his people had perished.

He made his way to the West, where he had a good home and houses to rent and a hole in the hillside that was just then being changed from a prospect to a mine.

The townspeople, who had heard of the disaster, waited for him to speak of it—but he never did. The neighbors nodded, and he nodded to them and passed on about his business. The old servant came and asked if she should open the house, and he nodded. The man-servant—the woman’s husband—came also, and to him Bradish nodded; and at noon he had luncheon alone in the fine new house that had just been completed a year before the catastrophe.

About once a week Bradish would board the midnight express, ride down the line for a few hundred miles, and double back.

One would have thought that the haunting memory of Ashtabula would have kept him at home for the rest of his life; but he seemed to travel for the sake of the ride only, or for no reason, as a deaf man walks on the railroad-track.

Gradually he extended his trips, taking the Midland over into Utah; and once or twice he had been seen on the rear end of the California Limited as it dropped down the western water-shed of Raton Range.

One night, when the Limited was lapping up the landscape and the Desert was rushing in under her pilot and streaking out below the last sleeper like tape from a ticker, the danger signal sounded in the engine cab, the air went on full, the passengers braced themselves against the seats in front of them, or held their breath in their berths as the train came to a dead stop.

The conductor and the head man hurried forward shouting, “What’s the matter?” to the engineer.

The driver, leaning from his lofty window, asked angrily, “What in thunder’s the matter with you? I got a stop signal from behind.”

“You’d better lay off and have a good sleep,” said the conductor. 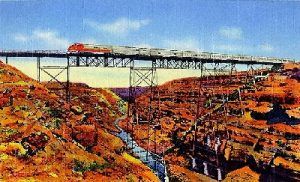 “I’ll put you to sleep for a minute if you ever hint that I was not awake coming down Cañon Diablo,” shouted the engineer, releasing his brakes. As the long, heavy train glided by, the trainmen swung up like sailors, and away went the Limited over the long bridge, five minutes to the bad.

A month later the same thing happened on the East end. The engineer was signaled and stopped on a curve with the point of his pilot on a high bridge.

This time the captain and the engineer were not so brittle of temper. They discussed the matter, calling on the fireman, who had heard nothing, being busy in the coal-tank.

The head brakeman, crossing himself, said it was the “unseen hand” that had been stopping the Limited on the Desert. It might be a warning, he said, and walked briskly out on the bridge looking for dynamite, ghosts, and things.

When he had reached the other end of the bridge, he gave the go-ahead signal and the train pulled out. As they had lost seven minutes, it was necessary for the conductor to report “cause of delay;” and that was the first hint the officials of any of the Western lines had of the “unseen hand.”

Presently trainmen, swapping yarns at division stations, heard of the mysterious signal on other roads.

The Columbia Limited, over on the Short Line, was choked with her head over Snake River, at the very edge of Pendleton. When they had pulled in and a fresh crew had taken the train on, the in-coming captain and his daring driver argued over the incident and they each got ten days,—not for the delay, but because they could not see to sign the call-book next morning and were not fit to be seen by other people.

The next train stopped was the International Limited on the Grand Trunk, then the Sunset by the South Coast.

The strange phenomenon became so general that officials lost patience. One road issued an order to the effect that any engineer who heard signals when there were no signals should get thirty days for the first and his time for the second offence.

Within a week from the appearance of the unusual and unusually offensive bulletin, “Baldy” Hooten heard the stop signal as he neared a little Junction town where his line crossed another on an overhead bridge.

When the signal sounded, the fireman glanced over at the driver, who dived through the window up to his hip pockets. 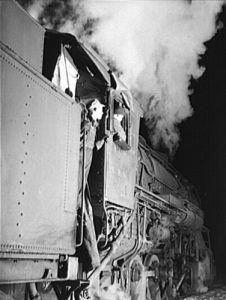 When the engine had crashed over the bridge, the driver pulled himself into the cab again, and once more the signal. The fireman, amazed, stared at the engineer. The latter jerked the throttle wide open; seeing which, the stoker dropped to the deck and began feeding the hungry furnace. Ten minutes later the Limited screamed for a regular stop, ten miles down the line. As the driver dropped to the ground and began touching the pins and links with the back of his bare hand, to see if they were all cool, the head brakeman trotted forward whispering hoarsely, “The ol’ man’s aboard.”

The driver waved him aside with his flaring torch, and up trotted the blue-and-gold conductor with his little silver white-light with a frosted flue. “Why didn’t you stop at Pee-Wee Junction?” he hissed.

“Is Pee-Wee a stop station?”

“I pulled the bell.”

“Go on now, you ghost-dancer,” said the engineer.