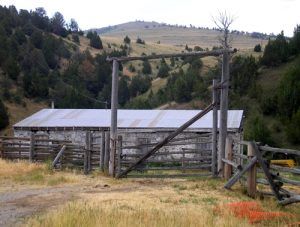 Red Bluff, Montana was first settled in 1864 as a mining town and stage station on the Bozeman Road. During its heyday, it sported two gold mills, various businesses, 12 saloons, a post office, school, and about 500 people. The town thrived until 1890 when the Northern Pacific Railroad made its way to the Alex Norris Ranch some three miles to the west. Soon, the town of Norris was formed and within no time, most people moved there. By 1901, all the businesses, the school, and post office were closed. Today, there are just a few scattered remains of the once-prosperous community, including the ruins of the old Tanners Hotel on the north side of Highway 84. To the northwest stands the old Red Bluff-Norris Cemetery. South of the highway is a stone structure that was once the school.

The area mines were also located south of the townsite in the Tobacco Root Mountains. Here, many mining remnants can be seen by driving southward on a county road. The old townsite is located about 34 miles west of Bozeman on Highway 84.

Montana Forts of the Old West