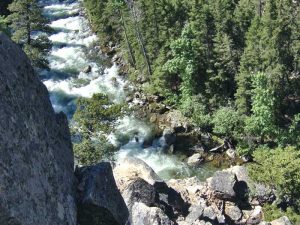 Though the claims were worked on a small scale for several years, the major mining activity wouldn’t start until the early 1880s. The lode was bought by the Princeton Mining Company in 1882 and was then actively developed, employing about 50 men extracting primarily silver ore. The small camp that grew up around the mine soon boasted a post office, school, hotel, store, and about 20 homes. The area mines continued to operate intermittently until early after the turn of the century, retrieving about approximately $1.25 million in silver, gold, lead, and phosphate.

Today, all that is left are a few dwellings, now occupied primarily by summer residents. The old townsite is located about 16 miles northeast of Phillipsburg. Travel north on Montana Highway 10A about 10 miles to Maxville, then east on Maxville Road for about 6 miles.