Sumpter, Oregon, before the 1917 fire that destroyed most of the city

In 1862, Hugh Asbury, John Reel, Fletch Henderson, Bill Flanagan, and Dick Johnson camped near Cracker Creek on their way to the California goldfields.

While they were there, they decided to do a little gold panning along the creek and were excited when bits of the precious yellow metal appeared in their pans. The next thing you know, they weren’t on their way to California anymore, deciding to settle right where they were. Soon they built a small primitive cabin between McCully and Cracker Creeks and named it Fort Sumter after South Carolina Fort Sumter, of Civil War fame. Today, remnants of that first cabin can still be seen about a half-mile above Sumpter on the Granite Road.

Growing slowly due to its remote location, the first post office was not established until 1874 with Joseph D. Young as the first Postmaster, at which time they added a “p” to the name. It was hard to get to Sumpter in those days, as the wagon road that wound over the hills to Baker City was nearly 30 miles away. However, that very same wagon road became the early stage route that connected many of the mining towns of the area.

Around 1895, Sumpter began to grow as new technology made it easier to extract gold. The Sumpter Valley Railway extended its track to the settlement just two years later, and the town grew to some 300 people. It was then that the boom began, and miners began to arrive in numbers.

Several brick buildings were built by the turn of the century, and streets were paved with planks. The new railway delivered as much as six carloads of mining equipment daily, and seven-stage lines were running. The town soon earned the nickname, The Queen City, as it became the hub for several surrounding mining camps.

Also, by 1900, almost nine million dollars in gold had been taken from the area’s 35 mines. The town, which had grown phenomenally, sported seven hotels, sixteen saloons, three newspapers, two churches, an opera house, two banks, a red-light district, and dozens of other businesses. A couple of years later, when the census was tallied, it found over 3,500  residents.

In 1913 dredging came to the Powder River. The remains of Dredge #1 can be seen near the Sumpter Valley Railway depot in McEwen. Dredge #2, the largest of three dredges used to extract the precious gold, can also be seen at the edge of town in a pond of its own making. Dredging continued in the valley until 1954.

On August 13, 1917, Sumpter was the site of a devastating fire. Starting in the Capital Hotel, the fire soon spread to adjacent buildings. Despite all efforts to contain the flames, nearly 100 buildings were destroyed. Lying totally in ruins, the fire spelled the death of the Queen City. Hard rock mining was winding down in the area, and many miners simply moved on to more profitable strikes.

The Sumpter Valley Railway began its decline in 1933, and passenger service was discontinued around 1937. The last run was in April of 1947. 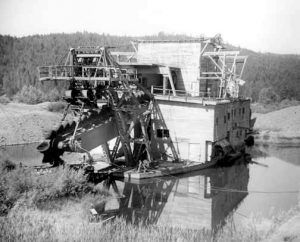 Allegedly there is still gold in the bedrock of Sumpter Valley as it was too deep for the dredges to get to it. The town has seen a revival as a historic tourist attraction, where the evidence of its former gold mining glory days is still in evidence in the many mine tailings.

The Sumpter Valley Dredge, operating from 1935 until 1954, has been preserved and now sits amid Sumpter Dredge State Park, where tours of the old dredge are available during the summer. The town also provides a historic Narrow Gauge Railroad, where tourists can experience the early 1900s by taking a steam engine tour of the area.

On Memorial Day and Labor Day weekends and on the 4th of July, the town comes alive with one of the most popular Flea Markets in the state. Be sure to plan on spending the day at the hundreds of vendors who set up throughout the town. 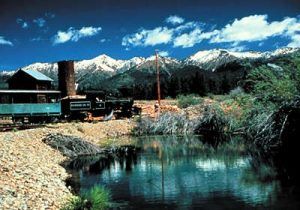